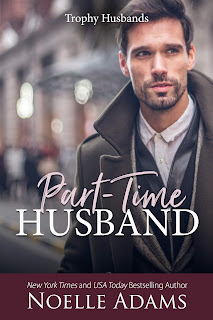 On a Wednesday afternoon, I ask Trevor Bentley to marry me. He might be the most arrogant, obnoxious man I know, but I need him to be my husband for a year.

He's not going to be a real husband. Just part-time. Yes, I have to live with him. And, okay, I also have to share his bed. And, sure, he's the sexiest and most exciting thing to ever happen to my controlled, organized life.

But still... It's only a part-time marriage. I'm not going to give him my heart. I know what I'm doing, and I'm too smart to fall for my husband.
I hope.

Going into this book, I was torn. I liked the premise. But, at the same time, I wasn't sure if I totally bought into the idea that it would work.

Trevor and Melissa are both successful, she works for her grandfather at the family business, and he works in advertising. There is an enemies to lovers element here, at least on Melissa's side...although I thought it was pretty obvious from the beginning that Trevor was in love with Melissa...or at least he was supposed to be, from one meeting.

And, I get it. Instant attraction is a thing.

The issue I had with this one is that I just never really felt the connection. It was almost there, but it just never quite worked for me, I never REALLY believed that he was absolutely crazy about her, and I was not ever really convinced that he was "the one" for Melissa. By the end I was more convinced, but it was a little lukewarm. Usually, I am not one that is all that concerned about dual POV, but in this title, I think it would have gained a lot if we had the opportunity to see things from Trevor's perspective.

I do recommend this title, albeit a little reluctantly, but I did enjoy it overall. 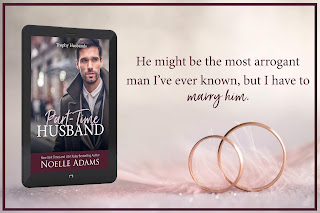 I’m feeling warm and relaxed when I finally get out of the bathtub. I usually don’t walk around the apartment unless I’m covered up, but since Trevor isn’t here I just wrap a towel around me. My hair is piled up messily on my head, and I’m carrying my bath salts and soap.

I open the bathroom door and nearly run smack into Trevor.

I give a little squeal and immediately look to make sure my towel is in place. “I didn’t know you were home.”

“I know that.” He’s looking very sexy in that end-of-the-day way he has. Five-o’clock shadow. Slightly loosened tie and collar. Half-lowered eyelids.

God, the man is hot.

“I could smell you as soon as I walked in the door,” he adds, the slightly rough words doing nothing for my flustered state of mind.

“You smelled me?” I’m thinking all kinds of things at the moment, and none of them are suitable to share with the man in front of me.

He reaches over, and I swallow over a quick intake of breath. I think he’s going to touch me. I want him to touch me.

He touches my bath salts instead. “This stuff you put in your bath. I smelled it as soon as I walked in, so I knew you were in the bath.”

It’s perfectly logical. And kind of a disappointment.

His hand moves from the bath salts, and his fingertips slowly trail up my towel to the bare skin at my collarbone. It’s barely a touch, but it makes my skin flush and a pulsing begin between my legs.

“What did you think?” he asks, his voice a little thicker than normal.

“What did I think about what?” I have no idea what he’s talking about. My brain isn’t exactly functioning at the moment.

“What did you think I smelled?”

I’m staring at his plum-colored tie because it’s safer than meeting his eyes right now. I don’t want him to know how I’m feeling, how his touch, his presence is affecting me.

“Are you planning to move out of the doorway? I need to use the bathroom.”

And that’s like a load of bricks on my breathlessness. I’m able to meet his gaze now with a cool expression as I step out of the doorway.

I’m on my way out of the room when he says, “We can return to this particular conversation a little later in bed if you want.”

The asshole knows exactly what I was feeling just now.

Fortunately I’m not feeling it anymore.

I turn my head and see him smirking at me, as if he thinks he’s already won.

“Yes, I’m sure. The problem is that any kind of conversation with you involves your infuriating personality, and that just doesn’t work for me.”

“You think wrong. And I thought you had to go to the bathroom.”

“I do. We’ll resume this conversation at a later date.” 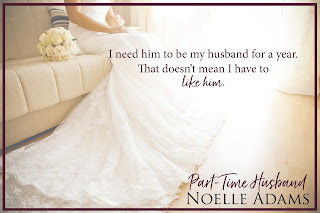 Noelle handwrote her first romance novel in a spiral-bound notebook when she was twelve, and she hasn’t stopped writing since. She has lived in eight different states and currently resides in Virginia, where she reads any book she can get her hands on and offers tribute to a very spoiled cocker spaniel.

She loves travel, art, history, and ice cream. After spending far too many years of her life in graduate school, she has decided to reorient her priorities and focus on writing contemporary romances.