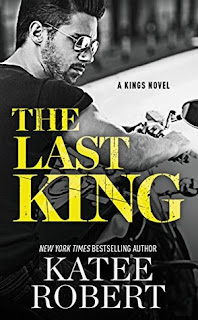 Ultra wealthy and super powerful, the King family is like royalty in Texas. But who will keep the throne? New York Times bestselling author Katee Robert introduces a red-hot new series.

THE MAN SHE HATES TO LOVE

Beckett King just inherited his father's fortune, his company-and all his enemies. If he's going to stay on top, he needs someone he can trust beside him. And though they've been rivals for years, there's no one he trusts more than Samara Mallick.

The rebel. That's how Samara has always thought of Beckett. And he's absolutely living up to his unpredictable ways when he strides into her office and asks for help. She can't help wondering if it's a legit request or just a ploy to get her into bed. Not that she'd mind either one. After all, she likes to live on the edge too.

But soon the threats to the King empire are mounting, and the two find family secrets darker than they ever imagined and dangerous enough to get them both killed.

Some books just work, and they work well.  All of the pieces are in place and the characters work, the actions are believable and you like the people...well, the ones you are supposed to like.

This was one of them.

Beckett and Samara are rivals, and they are not supposed to be friends, or attracted to one another.  But, they are and they are.

Katee Robert has a talent for writing titles that are twisty and that you really do worry that the characters aren't going to make it through the story in one piece.  I was worried about both of them.  As this is the beginning of the Kings novels, there was a part of it that I thought was a little predictable, but it worked and the book was plotted in a way that made it realistic and work.

I also loved that Samara was from India.  I loved that she was not the traditional heroine of a romance novel.  This added a dimension to the novel that I enjoyed and appreciated.

This was an excellent start to a series and I am looking forward to the next one in the series.

Buy This Book!
Amazon
Posted by Booked All Night - Laura at 10:30 AM