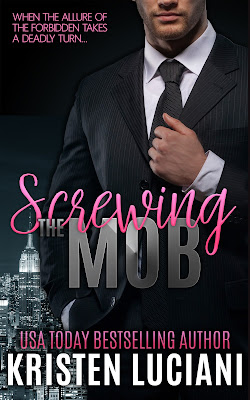 When the allure of the forbidden takes a deadly turn…

He never cared about me. He never would. He was always on the take, but this time he took too much.

I betrayed my family tonight. I lost my virginity tonight. I was ready to give it all up tonight.

I loved him, and he treated me like I was no better than the dirt on the bottom of his Louboutin loafer. Big mistake. One thought makes me smile through the hot tears streaming down my face.

I could have him killed.

I only wanted to f*ck her. I tried to convince myself that’s all it was. But I’m a damn liar. I lied to myself about how I feel, and I lied to her when I told her I wanted her to leave.

Now I’m dodging calls from her maniacal brother, who, if he found out I’d so much as seen her in that sexy as hell lingerie, would wrap his beefy hands around my throat and squeeze until my eyeballs popped out of the sockets.

A shiver runs through me despite the blast of heat from the hallway floor vent that toasts my quivering legs. I reach out, my fist about half an inch from the bedroom door, poised to knock. Wait, why? He knows I’m coming. He left the front door unlocked for me. Jesus, I can’t even think straight anymore. Memories pop between my ears like bullets. Me sitting on Nico’s bed, watching a video on his iPad, Nico’s hand skimming my bare arm, Nico’s lips on mine, Nico’s tongue…

What the hell is wrong with me? His grandfather just died, and all I can do is think about that night…the one that never should have happened, the one I continue to dream about, the one I relive every time I close my eyes.

Forget the fact that I hadn’t heard from him since.

And that he’s my brother’s best friend.

Nico Salesi will never be mine, and I’ve come to terms with that. Kind of.

I’d hoped to accept it once I got to college, but that didn’t happen. None of the guys I’d met could hold a candle to Nico. I couldn’t find the same pools of the darkest chocolate brown that begged me to drown in them, the ones that sparkled with excitement over the release of a new Marvel super hero movie, ones that deepened with lust when they gazed at me. And I definitely couldn’t find a pair of lips as bitable, ones that tasted like a wide variety of Jolly Rancher flavors, ones I wanted plastered against my own…and then on other areas—

I grasp the cool brass doorknob in my shaking hand and twist it. The door creaks open, and I squint in the dimly lit room. His bed is in the back corner of the expansive space, and he’s sprawled out on his back, tossing a football up and down. He doesn’t look up, and that should be my first clue that he doesn’t give a flying fuck about me. I clench my fists, trying to control my disappointment.

He never called, never texted, never emailed. Not until today, and of course, I come running the second he asks. I never fail to make the wrong choices.

He doesn’t care about anything except his business dealings. He’d never let anything compromise his place in life, least of all me.

It was a kiss. I have to forget about it. It’s not why I’m here. I’m here for Grandpa Vito, not for Nico.

Maybe if I keep repeating those bullshit lies, I’ll finally convince my heart that they’re true.

I inch toward the bed, my heart thudding against my ribcage. I can feel beads of perspiration pop up along the back of my neck, a typical reaction to his presence. My stomach is twisted like a Bavarian pretzel. Good God, will I ever be able to get over this guy?

And why doesn’t he stop throwing the fucking football? He’s the one who called me.

And just like that, he makes one final catch and sits up. His eyes aren’t sparkling. They’re dark, lost, empty. Soulless. The vacant stare makes my chest tighten and I stop, uncertain about my next steps.

He slides off the bed and creeps toward me. His dark hair is tousled, like he’d just woken up from a fitful sleep. There are bags under his eyes, and his normally rosy cheeks are all but drained of color.

Tears sting my eyes when his hands grasp my shoulders. “Shaye,” he murmurs in his deep, gravelly voice.

His hands move to my hair, twisting a hot pink tendril of hair around his index finger. “You dyed your hair.”

My hand flies to the chunky streaks I’d just had added to the ends of my blonde hair. “Yeah…” I breathe him in, immediately tipsy on the scent of watermelon Jolly Ranchers.

He nods over to his desk. “He bought that for you for Christmas. It’s the collector’s edition.”

A sob rises in my throat when my eyes fall to the gift, memories of our marathon Scrabble sessions wallpapering my mind. It felt like a lifetime ago, when things were so simple and the biggest dilemma I had was to decide which word would yield me the most points during our cutthroat games. “I love it. I’ll always treasure it.”

“He missed you at Christmas. Made me promise to get it to you before you went back to school.”

“I should have gone to see him. I’ll never forgive myself for not saying goodbye.”

“Don’t beat yourself up over it. He knew the deal, Shaye.”

“I hate that it kept me away.”

“Yeah…” My heart is pounding like a jackhammer, drowning out all sound, and I almost miss his reply. A lump the size of a golf ball has taken up residence in my throat and squeezing out a response is near impossible.

But, as it happens, talk is overrated.

He pulls me close, bending down to press his swollen lips to mine – hot, intense, and hungry for any crumb I’m willing to drop. His strong hands fist my long hair, his kiss deepening with need. I wrap my arms around his tall, muscular frame, melting into his warmth.

My mind is screaming at me to pull away, to stop this craziness. This behavior is so unlike Nico. He never loses control or shows his hand. It’s why he’s such a valuable asset to the family.

He doesn’t really want me. 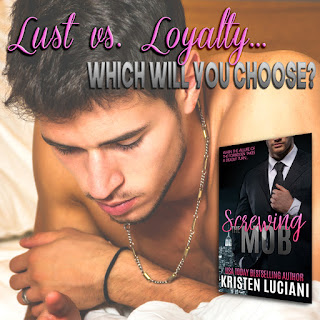 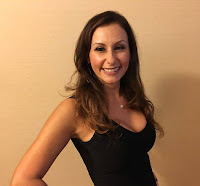 Kristen Luciani is a USA Today bestselling author and momtrepreneur with a penchant for stilettos, Silicon Valley, plunging necklines and grapefruit martinis. As a deep-rooted romantic who prefers juicy drama to fill the lives of anyone other than her, she tried her hand at creating a world of enchantment, sensuality, and intrigue, finally uncovering her true passion. No pun intended… 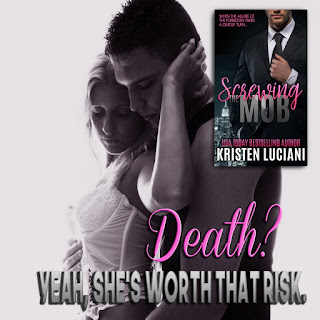