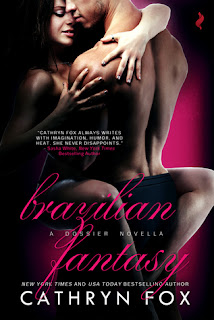 Daycare teacher Piper Young has five of the best friends in the world. Even though they did get her to agree to their crazy plan. Each friend is given a dossier outlining an adventure they must go on to get out of their dating ruts.

When Piper finds herself in Brazil and sets eyes on the sexy billionaire her friends have in mind for her–she’s all in. Hell yes, Best Friend of the Year Award goes to…

Except, there’s a glitch. Turns out she’s there to babysit his kid. Who the hell put that in her dossier? The point is to escape her normal life. Yeah, no award now.

But the dark and mysterious widower is so much more than she could ever imagined, and the chemistry between them is off-the-charts. And now he’s using their two weeks to try to convince her to stay.

Piper is a daycare teacher who thinks she is going on an exotic vacation.  Lucas is a widower with a daughter who stopped speaking after her mother's death.

While I did enjoy this overall, I thought Lucas trusted Piper with his daughter a little quickly.  Other than that, this book worked for me, and I enjoyed it overall.