KISS ME BACK BY SIDNEY HALSTON - ARC REVIEW 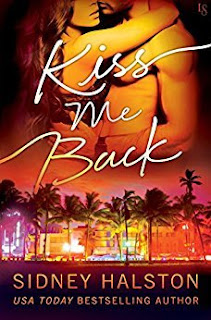 The only thing hotter than the Miami sun is the sexual tension at Panic, the South Beach nightclub where love knows no boundaries.

Lola: I’ve seen the way women in line behind the velvet rope look at William Fox, like he’s an Armani-clad St. Peter at the pearly gates. Except Panic isn’t heaven, and this bouncer is no saint. He’s been tempting me to sin ever since I started working here, but Fox’s slick smile and bad-boy swagger tell me everything I need to know about him. Still, a girl has needs. And Fox looks ready to fulfill every last one—at least for a night. . . .

Fox: I’m not used to being ignored—especially by women—but Lola Daye is different. The pretty bartender with the red lips and icy blue eyes seems perfectly happy pretending I don’t exist. Too bad, because the more she ignores me, the harder I fall. So I’m floored when she answers my drunken, flirty text with a yes. Lola claims she only wants a fling, but after one kiss, our bodies are speaking the same language. And I’m ready to prove that what we have could be forever.

No cheating. No cliffhangers. And no dress code.

Lola and Fox have an instant attraction, that they don't act on...although Fox doesn't give up trying to get her to go out with him. Books with coworkers trope are fun, and I enjoy the trope as I like watching them resist one another while forced to be together.

It finally works, she gives in (and after a hiccup created by his tough day) and they have their date...and he realizes she's keeping a heck of a secret. What it is would be a spoiler. However, while I think it's possible she could keep that secret, I don't think it's likely... and I had a bit of a tough time getting past this part of the plot and totally buying into the characters and their relationship.

I did enjoy this overall, and I do recommend it. 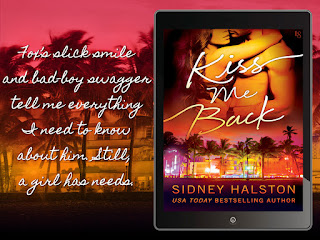 The little hairs on the back of my neck stand up and without having to turn around I know William Fox is close by.

When I got the job at Panic, I was happier than I’d been in years. Knowing how packed the club gets and the prices of the drinks, I knew my tips would double my income. But then I crashed into Fox. Literally. And that feeling of happiness changed into something I hadn’t felt in years.

For a long time my existence has consisted of work, sleep, eat—rinse and repeat. I’ve been so focused on survival, I’ve pushed all my needs and wants aside for so long that I hadn’t realized how much I’ve missed having a connection with a man. And, the connection I had with Fox was serendipitous. It was immediate, intense, and electric. I’m not talking love at first sight. No, I’m talking lust and hunger, and a desire to pull that thick beard toward me and kiss him with reckless abandon.

Sometimes I think I can feel his deep, gravelly voice when he’s near or maybe I can just sense he’s in the room by the way women turn their heads and stare.

Even after half a year of knowing the man, I still don’t really know much about him except that people seem to gravitate toward him. He’s charismatic and funny and talks a lot. I can tell, since his lips are constantly moving. I also know he’s confident and a little bit arrogant, and there’s an air to him that screams money and power.

From the moment he crashed into me, I’ve known we’re as different as two people can be. From his designer suits to the way he styles his hair; the man is obviously well-off. He always smells of that men’s cologne, the expensive one that they give samples of at the mall. I don’t know how much a bouncer at a nightclub can possibly make, but Fox has it in spades.

And because life isn’t fair, God has been abundantly kind to the man by not only blessing him with wealth and charisma, he also has sex appeal the likes of which I’ve never experienced, which is why every time he walks by, I want to jump him like a cat in heat.

So, naturally, I avoid him. And have since the day I crashed into him.

I ignore the little pinpricks on the back of my neck and refuse to look back at him.

My palms sweat and my heart starts to beat faster every time he’s near. On a normal day, I’m awkward, but when he’s around I’m just . . . weird. I mean, the man had to ask me for his hand back when we first met. I was mortified.

I see the way other women look at Fox; the smiles that spread across their faces when he lets them into the club. As if he’s Saint Peter standing in front of the pearly white gates. Except club Panic isn’t heaven and Fox is no saint.

Fox . . . the name suits him. His hair—more salt than pepper—makes him look like a silver fox. As does his sly smile—the one where the corners of his lips stretch to make a perfect half-moon that ends high up on his face, forming little crinkles at the edges, like the Joker. His beard, full but manicured to perfection. It’s like he knows the effect his smile has on the opposite sex, so he makes sure that his lips are the focal point, the beard just an adornment to draw attention to his mouth. He’s smooth, that one. He’ll swallow you up, then spit you out, and you’ll let him because he looks like the kind of guy who will show you the best time. Tell you all the right things. Show you all of life’s decadent luxuries. I can tell all of this just from that devilish smile. Because it’s not just a smile. It’s slow-forming, and it crinkles the corners of his eyes in an alluring way.

Which is why I avoid him.

I’ve been hurt before, by a guy less intense than Fox. A guy who wasn’t worth one single tear, yet I foolishly shed many tears over that jerk. I lost Gus at the same time I lost a part of myself—literally. And then I vowed never to open my heart again. So I’ve focused all my energy during the last seven years on my goals—and Fox is the antithesis of my goals.

I’ve had enough crap in my life, thank you very much. I don’t need Fox putting me through the wringer. So, I keep my head down and work but that doesn’t mean I don’t see everything.

And one thing I can’t ignore is how he is always just . . . there. He’s been trying to get me to go out with him for the last six months, and I keep rejecting him. He’s not a creep about it, but I’m starting to think that my rejections are just fueling him on.

I’ve become that one thing he can’t seem to catch.

From the corner of my eyes, I catch him stepping out of his flashy car, a dark gray Armani suit stretched tightly around his two-hundred-and-fifty-pound muscled frame. I hope he hasn’t seen me but I can’t tell with those dark sunglasses over his eyes. I shuffle faster into Panic so I can disappear inside the dark crowd of the nightclub.
Posted by Booked All Night - Laura at 10:00 AM