SECOND CHANCE COWBOY BY A. J. PINE - COWBOY OF THE MONTH AND ARC REVIEW 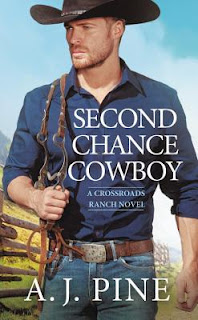 Once a cowboy, always a cowboy

Ten years ago, Jack Everett left his family's ranch without a backward glance. Now, what was supposed to be a quick trip home for his father's funeral has suddenly become more complicated. The ranch Jack can handle---he might be a lawyer, but he still remembers how to work with his hands. But turning around the failing vineyard he's also inherited? That requires working with the one woman he never expected to see again.

Ava Ellis broke her own heart the night she let Jack go. She was young and scared---and secretly pregnant with Jack's baby. Now that he's back and asking for her help, Ava sees her opportunity to right the wrongs of the past. But how will he feel about the son he's never known? Could this be their second chance---or their final heartbreak?

There was something about this book.  The chemistry between Jack and Ava was scorching.  There's a lot more to this book that is worth mentioning, but it isn't very often that the chemistry between characters sparks this strongly from their first meeting (well, the one 10 years later) and continue throughout the title.

This is my first book by A. J. Pine, and I absolutely loved it.  I thought Jack was authentic, and my heart broke for him and all of the things he was denying himself because he was afraid he was like his father.  I loved all of the moments he had to prove to himself, and those around him, that he was nothing like the man and the past that he was running from.

I liked Ava, a lot.  I thought she was strong, and I respected the reasons for the decisions she made, even though I am not sure I fully agreed with them.  Choosing to keep from someone that he is going to be a father is a big secret to keep, and she knows this.  And, she owns that she did it without really making excuses.  She gives explanations, but not excuses.  Did I totally agree with her?  No...although I see her logic.

But, it doesn't matter if I agree with the choices of the characters as much as it matters that I believe they do...and, I believed in the characters.

The best thing about a second chance, and it worked so well here, is that there is a history between the characters that heightens not only the first meeting, but the subsequent interactions.  It was done so well in this title that you felt the tension between Jack and Ava, the longing, the desire to reconnect and the fear that them not making it this time would destroy them both.

This is also the first book in a new series yet it doesn't fall into the trap of being too much about the secondary characters in order to build the story (which is a pet peeve of mine).  I think this worked so well because the secondary characters are his brothers, and other members of his family, so their inclusion in the story feels more natural than other first in the series titles.

This was an emotional read with amazing sexual chemistry.  I loved it, I recommend it, and I can't wait for the next in the series! 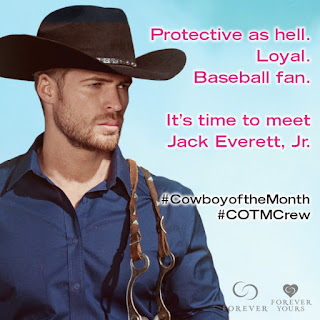