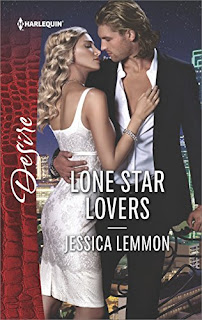 This sexy Texan was only a one-night stand.

Until he became her client--then her fake fiance!

Penelope Brand's hookup with billionaire Zach Ferguson was casual. Until he announces her as his fake fiancee to avoid scandal--and she discovers she's pregnant. Now Zach demands they say, "I do," for their child. But Pen won't settle for a sham marriage. If Zach wants to keep his Lone Star lover, it's his whole heart or nothing...

There's a challenge to writing books in which the heroine is pregnant for a good portion of the book.  The author, at least in my opinion, has to convince the reader that the couple would be together even if there was no baby.  A lot of books in this trope suffer here, as the romantic relationship relies too much on the baby and isn't developed to where you believe they are a couple who love one another and their child.

In this case, they were also dealing with having to stay together, or figure out a way to explain splitting up and the baby...because there was also a fake engagement.

Zack and Penelope have everything pointing to them not working: fake engagements; crazy ex's who shriek like their are in the movies (no spoilers, but best line ever); surprise pregnancies; insane family expectations and relationships.  Nothing about the situation is simple, and they face reasons to call it quits often, but they don't.  I loved how well constructed this was, how it heightened the relationship with each test they faced, each conversation really built the relationship and moved it forward.

Penelope wants the romance, and the once in a lifetime love.  Zack has closed himself off from ever falling in love again, and thinks a relationship where they are both committed to being parents and really like each other is enough.

I loved how clever this was, to take where so many of these books seem to build the relationship (around the baby and not the romance) and put it in the forefront of the story by making this exactly what Zack is trying to do, while failing spectacularly because he is falling in love with Penelope.

This, really, is exactly what you want from a romance, at least it is what I want, and it is the reason I read them.  I want the fairy tale, I want the hero to love the heroine (even if it is in spite of himself) and to realize that a life without her isn't what he wants, and that the things he thought mattered, and the things he believed, have all changed now that the heroine is in the picture.

Is this a fairy tale?  Yes, yes it is.  And, this book tells the fairy tale incredibly well.

Challenge accepted and met, Ms. Lemmon wrote a book I believed, and enjoyed.  I recommend this title.

Buy This Book!
Amazon
Kobo
Posted by Booked All Night - Laura at 11:30 AM