BOUGHT BY THE BOSS BY STACEY KENNEDY - ARC REVIEW 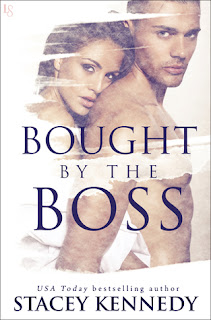 What’s better than one bad-boy boss? How about two?

In a duet of naughty novellas, a charity date auction turns into all-out war when a pair of powerful corporate lawyers each buy the other’s assistant for a weekend of seduction.

I’ve wanted Aria Finley from the moment I met her.
We flirt, we laugh, we connect. It could be perfect.
She’s even best friends with my assistant.
Problem is, she works for my archnemesis—Jackson Keller—and she’s the kind of girl who stays loyal unless you give her a reason not to.
Besides my hard-on there’s something hot between us, and I won’t rest until I put my finger on it.
So when I get the chance to buy Aria for the weekend at a charity auction, there’s no limit.
I’m going to take her home and take what I want because I’ll make her want it too.
And by Monday, she’ll know she’s mine.

Liam Maxwell thinks he can get to me through my assistant, Aria.
Well, two can play that game.
Now Mallory Beckett—Liam’s assistant and Aria’s best friend—is mine for the weekend.
Only she has no idea who bought her at the charity auction.
This is going to be worth every penny.
But soon I realize that Mallory has been waiting for my touch all along.
What starts as a fling turns into something more.
From the beginning, I was so focused on stealing her away.
I never thought about the fact that I’d drown if I lost her.
Now the game has changed. And she needs to know that she belongs to me.

Aria and Liam have been dancing around one another, afraid to make the connection as Liam and Jackson are enemies, and Aria works for Jackson.

Enter the auction where Liam bids on her, and they spend a long weekend together, and the attraction between them becomes something they are no longer willing to ignore.

This novella was hot, and it was sexy right away...although I didn't love the set up of this one.  I believed there was an attraction, but I was not convinced they had spent enough time together to be in love with one another.  But, meh, it is a novella and things happen quickly in them.

The story of Jackson and Mallory was really enjoyable.  I liked that there was an attraction there, and a bunch of inaccurate assumptions on both sides, and that this gave itself to a rather believable romance.  In a novella, the challenge is how quickly everything needs to happen by looking the time constraints directly in the face, dealing with a couple who was just giving in to the attraction and ending it, before the epilogue, in a place that worked for the budding/new relationship.

From a pacing standpoint, I believed the 2nd story a little more than the first, but I enjoyed both and I recommend this title.