THE ONES WHO GOT AWAY BY RONI LOREN - ARC REVIEW 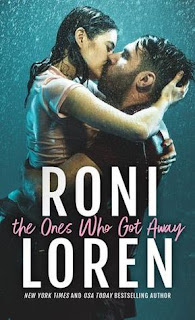 Liv's words cut off as Finn got closer. The man approaching was nothing like the boy she'd known. The bulky football muscles had streamlined into a harder, leaner package and the look in his deep green eyes held no trace of boyish innocence.

It's been twelve years since tragedy struck the senior class of Long Acre High School. Only a few students survived that fateful night—a group the media dubbed The Ones Who Got Away.

Liv Arias thought she'd never return to Long Acre—until a documentary brings her and the other survivors back home. Suddenly her old flame, Finn Dorsey, is closer than ever, and their attraction is still white-hot. When a searing kiss reignites their passion, Liv realizes this rough-around-the-edges cop might be exactly what she needs...

Liv and Finn were together in high school...sort of.  He kept her a secret and he has always blamed himself, just a little, for the fact that he thinks that may have impacted events on a tragic night in high school.

The ones who got away are the ones who lived through a school shooting.  And, I admit, I was intrigued at the idea of having this as one of the central themes of the book.  And, at the same time, a little unsure if it could work.

It did, as it gave the characters a relationship and it gave them something to have in their past, a draw to the town and a reason to pursue the emotions that were still below the surface.  I found it interesting.

But, at the same time, I thought too much of the story was about the past, too much of the draw was because of the past.  For a romance, I want to feel that...at least by the end, there has been some movement forward for the characters, that they are no longer still trapped by the past actions.  This is especially true when it is a second chance romance.

In this case, while I enjoyed it, this book felt more like a prologue to the next one, as it really dealt with all of the things that they needed to move past from the night.

I do recommend it, as I did mostly enjoy it...but I am looking forward to the next one a lot more.

Buy This Book!
Kobo
Posted by Booked All Night - Laura at 8:00 AM

Labels: 3 Stars, Review by Laura, Roni Loren, The Ones Who Got Away