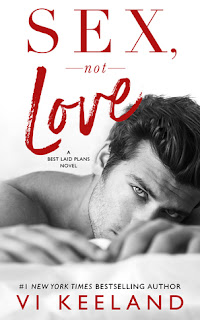 We met at a wedding—him sitting on the groom’s side, me sitting on the bride’s. Stealing glances at each other throughout the night, there was no denying an intense, mutual attraction.

I caught the bouquet; he caught the garter. Hunter held me tightly while we danced and suggested we explore the chemistry sparking between us. His blunt, dirty mouth should’ve turned me off. But for some crazy reason, it had the opposite effect on me.

We ended up back in my hotel room. The next morning, I headed home to New York leaving him behind in California with the wrong number.

I thought about him often, but after my last relationship, I’d sworn off of charming, cocky, gorgeous-as-sin men. A year later, Hunter and I met again at the birth of our friends’ baby. Our attraction hadn't dulled one bit. After a whirlwind trip, he demanded a real phone number this time. So I left him with my mother’s—she could scare away any man with her talks of babies and marriage—and flew back home.

I’d thought it was funny, until the following week when he rang the bell at Mom’s house for Sunday night dinner. The crazy, gorgeous man had won over my mother and taken an eight-week assignment in my city. He proposed we spend that time screwing each other out of our systems.

Eight weeks of mind-blowing sex with no strings attached? What did I have to lose?

Nothing, I thought.
It’s just sex, not love.
But you know what they say about the best laid plans…

This book made me cry.

I don't think there's a better way to let me know that, as a reader, I was invested.

I loved the first meeting between Hunter and Natalia, the idea that the things he has said in the past directly conflicted with what she does for a living. And, little do you know then, but there is so much more going on with Hunter. He has his reasons for pursing Nat, or as he and no one else calls her, Natalia. He also has his reasons for pulling back from her, and for not letting himself have the happy ending you can tell he wants.

Hunter broke my heart. He made me teary, he made my heart ache for him, and damn him, he made me cry.

Natalia is an incredible woman, to take on the things she has in her life, especially the things she doesn't have to...well, you get a good idea as to exactly who she is, and it lends itself well to knowing that whatever reason Hunter has for pulling away, for feeling like there is a reason that he needs to protect her, she is going to be strong enough to handle.

This book did not end the way I was expecting. Yes, there is a happy ending...but there was also info given that I did not think the reader was going to get. I thought we would be left in the dark and I loved the way this resolution was handled, as it lets you know that there is going to be a really happy ending. Complete with birds, and bird houses, and trees and the kind of love that lasts...50 or 60 years.

There are some books that you just don't want to see end. Sex, Not Love was one of those books for me. I finished it, sighed, and immediately wanted to read it again. This book was sexy, funny and full of heart and I absolutely loved it.

I loved how Natalia and Hunter met. I laughed out loud and settled in for what I knew was going to be one heck of a ride. The banter was spot on and I loved how Hunter pursued Natalia from thereon. These characters both come with their fair share of baggage and seeing them work through it was fantastic. I felt I could connect with Natalia and Hunter? Oh, Hunter is one hell of a practically perfect book boyfriend.

The chemistry was instant and just built throughout the book. The sex was hot and steamy, but these two had more than just sex. I was invested in them from the start and I loved the twists and turns their relationship took.

This book made me cry and it made my heart just break. But it filled all the cracks it created at the same time. I absolutely devoured this book when it hit my kindle and it is one I know will stay with me. I loved this book and can't recommend it highly enough.

Vi Keeland is a #1 New York Times and #1 Wall Street Journal Bestselling author. With millions of books sold, her titles have appeared in over eighty Bestseller lists and are currently translated in nineteen languages. She lives in New York with her husband and their three children where she is living out her own happily ever after with the boy she met at age six.