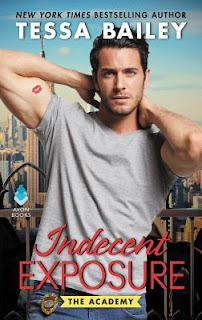 Is there a problem, Officer?

Jack Garrett isn’t a police officer yet, but there’s already an emergency. His new firearms instructor—the one who just dropped every jaw in the academy gym—is the same sexy Irish stranger Jack locked lips with last night. The Olympic gold medalist and expert markswoman is now officially off-limits, but Jack’s never cared much for rules . . .

Katie McCoy’s been cooped up in a shooting range for too long. A wild love affair is just what she needs to let loose, though she never imagined it would be with her smokin’ hot trainee. She cannot get involved with Jack—but a quick fling? Perfect. Falling hard for a charismatic recruit with an equal amount of sex appeal and secrets? Bloody stupid.

Jack’s charmed the pants off plenty of women (literally), yet few have ever looked beyond his perfect surface. Until Katie. He’ll do anything to keep her in his life . . . except tell her about his past. But a tiny lie of omission never hurt anyone, right?

At some point or another, I think I've read everything Tessa Bailey has written.

If this isn't the case, I'm close.

But what I can say for certain is this is not only one of the best books I've ever read, but it's also quite possibly the best book Ms. Bailey has ever written.

Jack. Where do I even start with how broken he is from events in his past? And, who wouldn't be? He had a rough childhood, yet somehow he came out of it with a stunning ability to love and care about others, even if his ability to do the same about himself is a little damaged. But, broken as he is, he's most certainly not beyond repair.

The beauty though is that while Katie shows Jack that he's better than he even realizes, he learns this for himself. You like Jack from the beginning, but by the end, you fall a little in love with him because of who he is, of what he's gotten past, because of what he's endured and because of who you watch him become.

Katie brings her own baggage, but who doesn't. And, her baggage conflicts with who Jack is...or rather the way Jack copes with the things in his life. And, I loved the angst this caused, the tension felt real. More often than not you love the people you love in spite of their flaws, you maybe learn to live with the imperfections, but the reality is that when love works, when it's real, it's the ability to accept all of the other person because letting them go is worse.

This book is angsty. Your heart will be in your throat, there will be times Jack, and Katie, break your heart. But it's so incredibly worth it.

I couldn't put this book down, and more importantly, I didn't want to. I didn't want it to end, and I'm sad I finished it. I want more time with Jack and Katie.

Jack and Katie are amazing. I recommend this title.

Check Out The Series
Goodreads - The Academy Series