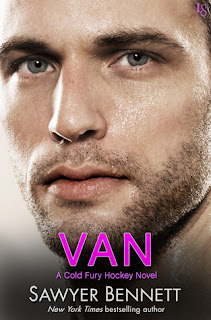 Score one for the Carolina Cold Fury hockey team as a stone-cold badass melts for a woman who makes his blood run hot.

As one of the league’s toughest enforcers, Van Turner is ruthless on the ice. He plays hard because it’s the only way to channel the rage boiling inside, and a reputation as an A-hole is better than everyone knowing the truth. Van has spent his entire life running from a secret that’s kept him from getting involved in relationships—or accepting lucrative deals with East Coast teams. Then the Carolina Cold Fury makes him an offer he can’t refuse . . . and Van meets a woman he can’t resist.

Simone Fournier is the stubborn one in her family—and that’s saying something, considering her brothers are two of the Cold Fury’s biggest stars. Simone gets what she wants, and what she wants is Van. Still, there’s a part of him Simone can’t reach, no matter how hard she tries. In private, he’s all fire and passion. In public, he freezes her out. Van may want to push her away, but Simone won’t let him go that easily. Because this time, she’s playing for keeps.

Once this book got going and we got to the relationship with Van and Simone, I absolutely loved it.  The push and pull between them, the attraction he tried to fight (not very successfully) and the glimpses of Simone behind the woman who was trying to drive Van absolutely crazy.  All of this was great.

But, what I didn't love was the Simone we meet at the beginning, the Simone who shows up at her brother's house and moves herself in, seeming to feel that what was his (including his roommate) was hers for the taking.  I did not like this Simone, at all.  And, there were a few times where I considered putting this book down, as I was not sure I was ever going to like the heroine.

I did, I must admit, come to really like her, and to see that Simone and the person she brings to the relationship is the exact person Van needed her to be.  Van has a past he doesn't like to talk about, one that he hides from, and that he allows to control him.  He needed someone like Simone, someone to step into his life and want him enough to be able to move past the things he was not able to move past himself.

By the end of the title, I was really a fan of Simone and of Simone and Van.  I liked their relationship and I liked where they ended up, with a new life that they were starting.

Buy This Book!
Amazon
Kobo
Posted by Booked All Night - Laura at 11:30 AM