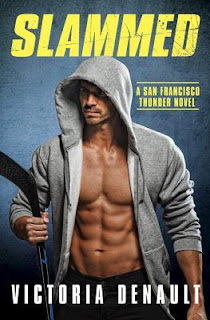 Not every goalie plays it safe...


As a publicist for the San Francisco Thunder hockey team, Dixie Braddock is too busy rescuing the players from trouble to get into any of her own. Except, of course, when it comes to the super hot new goalie. Because when a guy's kiss curls your toes and sets your heart on fire, how the hell do you just walk away? But if anyone ever catches them together, she'll lose her job faster than any slapshot.

Eli Casco is on the brink of having everything he ever wanted. He's finally been called up from the minor leagues to play on a championship team. And he just had the most mind-blowing night with the woman of his dreams. But now that he's an official Thunder player, Dixie is determined to keep her distance. None of the fame and fortune means anything to him without her to share it. If he truly wants Dixie in his life, it's time to throw down his gloves and put everything on the line.

So many forbidden romances aren't really forbidden and end up resolving with none of the drama that the characters expected, so in a way, I really enjoyed this one.  Eli is a goalie and Dixie is in the PR department for the San Francisco Thunder hockey team.  A relationship is forbidden, and termination for the PR person in the relationship is a guarantee.

So, this becomes about 2 people who want to be together, and who can't, because of a circumstance that is not easily changed.  And, I liked that the attraction is enough for them to be willing to at least consider the alternatives, to consider that maybe the relationship they are building is one that is worth some sacrifice.

I also liked that the plotting of the book allowed them to start their relationship when it wasn't actually forbidden, to give them a chance to see if they wanted to be together, and to deal with the budding attraction while it is still technically not against the rules.

The sex was hot, the connection felt real, and there were little touches that made Eli seem incredibly approachable and down to earth (and, those were the worst pick up lines in the history of pick up lines) and it made you understand the attraction to Eli that Dixie wants to fight, and ignore, but can't.

I loved that I believed the ending.  As I said in the beginning of the review, there were some changes that needed to be made in order for Eli and Dixie to have a real shot at being together. I loved that the changes both worked and seemed to come about more organically, as it left me with the belief that this is a couple who will be together for the long haul.

Buy This Book!
Amazon
Posted by Booked All Night - Laura at 11:00 AM