PROMISE NOT TO TELL BY JAYNE ANN KRENTZ - ARC REVIEW 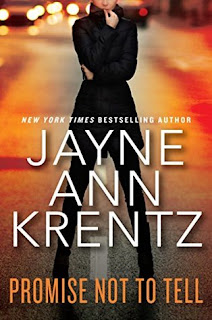 A painter of fiery, nightmarish visions throws herself into the sea—but she leaves her secrets behind . . .

Seattle gallery owner Virginia Troy has spent years battling the demons that stem from her childhood time in a cult and the night a fire burned through the compound, killing her mother. And now one of her artists has taken her own life, but not before sending Virginia a last picture: a painting that makes Virginia doubt everything about the so-called suicide—and her own past.

Like Virginia, private investigator Cabot Sutter was one of the children in the cult who survived that fire... and only he can help her now. As they struggle to unravel the clues in the painting, it becomes clear that someone thinks Virginia knows more than she does and that she must be stopped. Thrown into an inferno of desire and deception, Virginia and Cabot draw ever closer to the mystery of their shared memories—and the shocking fate of the one man who still wields the power to destroy everything they hold dear.

If you have read Jayne Ann Krentz, you have a pretty good idea what to expect from one of her titles.  You are going to get interesting, charmingly quirky characters who seem all the more human for their faults and eccentricities.  The writing will be sharp, the pacing will be quick.  The mystery will move quickly and will end up drawing people into the mix who seemed to only be on the periphery.  The pacing will be strong and the book will be enjoyable.

All of this is present in the story of Virginia and Cabot.  And, really, I am not sure what else I can say about this book without giving things away.  The issue, from a review standpoint anyway, of a book that is this well constructed is that it is impossible to review.

I could talk about the characters, and the plot, and I could ruin it for everyone else.

So, I am going to keep this short and say that I enjoyed this book.  A lot.  And that I highly recommend it.

Buy This Book!
Kobo
Posted by Booked All Night - Laura at 8:00 AM