LOVE ON THE TRACKS BY TAMSEN PARKER - ARC REVIEW 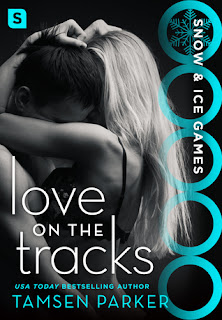 Welcome to the Snow and Ice Games where the competition is fierce and the romance is HOT.

Rowan Andrews is the unexpected darling of the Denver Snow and Ice Games. Luge has never captured the American public’s imagination as much as figure skating or even hockey, but her outsized personality and dare-devil ways have got everyone’s eyes glued to the track. Including a certain chart-topping heartthrob.

Zane Rivera is the lead singer of License to Game, the hottest band in the country. When Zane finds out Rowan Andrews has had some complimentary things to say about him, he arranges to meet her while he’s in Denver enjoying the games. And when a photo of him kissing Rowan on the cheek goes viral, they both see the advantages of faking a relationship for the publicity.

After Rowan’s injured in her final race, their relationship starts to feel all too real to Zane. But is this rock star ready to fall in love?

I really enjoy fake relationship stories, as I love the additional element of the couple being aware of one another, and knowing that it should be fake, but pursuing the relationship in public like it is real.

Zane felt real, although there were timeline issues with this as he talks about how he formed his band in his early teens, 10 years ago...but is 26.  Since he seemed older than early 20s, I was able to mostly ignore this for what it was and enjoy his part of the story.

Rowan however, I thought the age didn't quite line up with the past she talks about, that she either needed to be older to fit in with the past or to have less of the "sexual experience during events" that seems to come up in the story more than once.

I also had an issue with the actions of one of the secondary characters and how quickly the situation was resolved.

I enjoyed the parts of the story that were Rowan and Zane centered, and I believed their interactions, which allowed the book to work for me overall.  I liked this and I am interested in reading the next in the series.