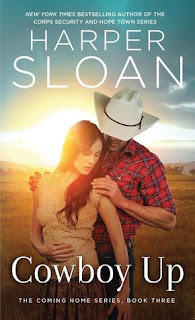 Hang on to your Stetsons, because you’re in for another wild ride! COWBOY UP by New York Times and USA TODAY bestselling author Harper Sloan is a passionate and breathless romance about the sparks that ignite when a cautious cowboy and a once-scorned woman open up to each other in the third installment of the Coming Home series.

As the eldest Davis, Clayton has always tried to lead by example. He takes his job as head of the family businesses seriously, making sure the farm and auto shop are running smoothly—along with keeping an eye on his brother and sister. For him, there's a time and place to let go of the control he holds with an iron grip. And with the way he grew up, coupled with disastrous end to his last relationship, he's just fine with his quiet, solitary life.

Most of the time.

What he hadn't counted on was cute, quirky, shy bookstore owner, Caroline Michaels. She's the proverbial woman next door—well, the next town over, that is. Caroline hasn't lived an easy life, but after escaping an abusive ex, she's finally living it for herself. The last thing she ever expected was a one-night stand with Clay Davis, a night she can't stop thinking about.

So when she falls on hard times and Clay comes out of nowhere to her rescue, she realizes just how impossible it'll be to stay away from him. Now all she has to do is convince him to live a little...

Will Clay be able to give up the reins and finally settle down? And, more importantly, will Caroline muster enough courage to lasso him up?

COWBOY UP is the third go-round in this Texas-set series which has everything readers could want in truly authentic Western romance novels filled with sizzle, heart...and plenty of horses and cowboy boots!

So, to watch him meet and fall for Caroline was interesting, although at points I thought it was a little more of an insta-love situation than I was expecting. There were parts that I thought Clayton and his reactions to things were a little too intense and maybe too over the top, although overall I liked him.

I also liked that Clayton and Caroline talk. They have conversations and they talk about the things that happen to them. There were no misunderstandings or huge issues created because of assumptions the other makes...he tells her they will always communicate, and that it might be harsh or angry, but always with love. I liked this a lot, and it was one of my favorite things about the book...that they were able to communicate.

Praise for The Coming Home Series:

—Booklist (Cowboy Up, Book 3 in the Coming Home Series)

Harper Sloan is the New York Times and USA Today bestselling author of the Corps Security and Hope Town series. She started using writing as a way to unwind when the house went to sleep at night. Harper lives in Georgia with her family. Visit her at AuthorHarperSloan.com or Facebook.com/HarperSloanBooks.
Posted by Booked All Night - Laura at 1:00 PM