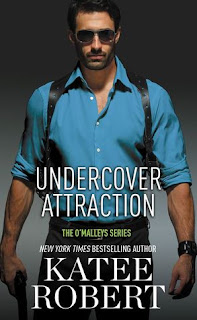 Scandal. Wealth. Power. Seduction. Welcome to the world of the O'Malleys.

Ex-cop Charlotte Finch used to think there was a clear line between right and wrong. Then her fellow officers betrayed her, and the world is no longer so black and white. Especially when it's Aiden O'Malley, one of the most dangerous men in Boston, who offers her a chance for justice. The only catch: she'll have to pretend to be his fiancée for his plan to work.

Aiden can't afford to let anyone see the man behind the mask. To run the O'Malley empire, he has to be cool and controlled at all times. But the moment he meets Charlie, they're playing with fire. Her slightest touch is enough to send him over the edge. At first their "engagement" was a way to eliminate his enemies. Now he'll do whatever it takes to keep her safe-- even if he has to destroy his own family to do it.

Mafia books can be a lot of fun. The inherent danger, the idea that the hero is more of an anti hero and not that nice of a guy, but is still attractive, sexy and you like him...it makes for an interesting read.

Aiden is, well, not a nice guy. As head of the O'Malley crime family, he makes tough decisions and does things that seem to result in bad things happening...but he makes the decisions for the good of the family and for the good of the members of his family. He is surprisingly loyal, and has a big heart...which is a difficult thing to manage while running a crime family.

But, she learns to first separate the crime boss from the man, and once Charlie does this, she sees how caring and loving Aiden is...and that is where the relationship becomes real.

I love that you get to know Aiden as a good man before you are part of the relationship. It does make for a slow build in the book, but it works overall.