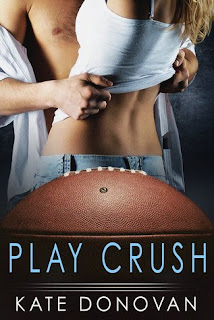 Armed with degrees in computers and robotics, Haylee Kirk is overqualified for the job of fitting wireless helmets to the heads of pro football players. Her ulterior motive? Impress the sexy tech genius who’s funding the project in hopes it will lead to her dream job. And since she felt a definite vibe with the guy when they crossed paths once before, maybe to her dream lover as well.

Even when she meets Wish Bennett, the tall, lean, ripped tight end for the Portland Lancers, she’s sure she’s immune to his charms. Because she’s already taken, isn’t she?

After an awesome rookie season, Wish is living the dream. Then he meets Haylee and life goes officially crazy. Not only is she pretty and smart, she’s actually measuring his head! It has to be a sign. Even when she tells him she’s in love with some tech dude, he knows he can change her mind.

With the help of two rowdy superstars, Wish convinces Haylee to bet her future—and his—on one monumental kiss. If it doesn’t work out, he’ll back off for sure.

The question is: will Haylee?

I enjoy books with characters who you don't think should be together and watching them work it out so they end up as the perfect couple.

Haylee and Wish are a classic opposites attract.  He is a football player and she is a computer geek, working with the team to see if a new helmet will help with the severity of injuries to the players.

I liked the chemistry between Haylee and Wish, but it took too much time (at least for me) to see them as a couple, there was a lot of time together, but not enough time with them together for me to really feel invested in their chemistry and their attraction.

I also thought her boss was a little overdone.  I get the idea of needing the conflict, but he seemed more like the villain in a cartoon than an actual person.  I have had bad bosses, but I have never had one this bad.  Overall, I just didn't believe in the character, so the conflict that was added by the character seemed really forced.

I liked this overall, and I enjoyed it...but I wanted more from the title.