GAME ON BY VICTORIA DENAULT 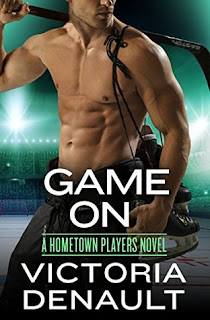 When it comes to scoring in the pro hockey league, Alex Larue is crushing it-with the hot puck bunnies. He's the life of the party, the guy with all the jokes . . . and the one whose Party Guy mask keeps the real him well hidden. The last thing he needs is anyone finding out about his troubled past, or the nightmares that haunt him still.

Brie Bennett is less than impressed by Alex from the moment she meets him. And even though he insists on volunteering at the charity she runs, she doesn't trust him. He's hiding something...but so is she. She's not just the rich, privileged New York princess he thinks she is. The animosity between them is undeniably addictive and as their worlds keep colliding it becomes supercharged with something else - attraction. But if they stop playing games and let each other in, they both might lose.

I love sports romance.  And, I have no idea why as I am not a sports fan.  Although, I have some guesses and the hot bodies, the alpha male and the pure physicality of the heroes in sports romances probably have something (ok a lot) to do with it.

Alex, however, is so much more than the brawny sports hero.  And, this matters a lot to me as a reader.  Books about hot men are a dime a dozen, so if I am going to read, and enjoy, a sports romance I need to like the characters, and I need them to seem real.  I loved that he was a little insecure, that he was the guy who wasn't the standout player on the team, that he was the one the coach doesn't want on his team...but he still needs to believe in himself.  Watching the struggle, to get past this and his childhood was interesting, and compelling and it made me like him, and care what happened to him.

Brie was also interesting.  A woman who, from outside, looks like she has it all and has all of the advantages that she possibly could have...but runs a shelter for kids who would be living on the streets otherwise.

Alex and Brie aren't sure what to think of one another, but they know there is an attraction that they have to fight...because neither of them want to be attracted to the other.

This makes for some incredibly hot scenes as they both fight the attraction they have to one another.  It also makes the payoff, the time they spend together, even better as you are invested in the characters and like them by the time they become a couple.

The writing was strong and the pacing was mostly good, although I would have liked Brie and Alex to be together for a little longer in the book, as I did think it took a little too long for them to start on the portion of the book where they were a couple.

Overall, I enjoyed this book and I recommend it.