FALLING UNDER YOU BY LAURELIN PAIGE-SPOTLIGHT 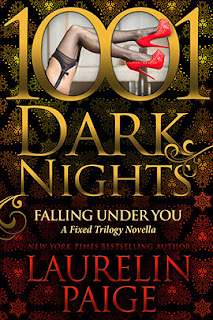 Norma Anders has always prided herself on her intelligence and determination. She climbed out of poverty, put herself through school and is now a chief financial advisor at Pierce Industries. She’s certainly a woman who won’t be topped. Not in business anyway.

But she’s pretty sure she’d like to be topped in the bedroom.

Unfortunately most men see independence and ambition in a woman and they run. Even her dominant boss, Hudson Pierce has turned down her advances, leaving her to fear that she will never find the lover she’s longing for.

Then the most unlikely candidate steps up. Boyd, her much-too-young and oh-so-hot assistant surprises her one night with bold suggestions and an authoritative demeanor he’s never shown her in the office.

It’s a bad idea…such a deliciously bad idea…but when Boyd takes the reins and leads her to sensual bliss she’s never known, the headstrong Norma can’t help but fall under his command.

I am not usually all that fond of novellas, as I think they go to insta-love and have no story to speak of. I should have known, if anyone can pull off a novella and make it great, it would be Laurelin Paige. And, she did. And it is great, and I loved it. And, I wanted more. But, I usually want an epilogue AFTER the epilogue, so me wanting more is nothing new.

Boyd (BOYD!!!) and Norma are so great together, and from the very beginning you get the sense that there is more to them getting together than him just wanting her on a temporary basis. He's too careful, he's too controlled (ok, that is kind of his thing), he's too invested in making sure that she is on board with what he needs from her for them to have a relationship. And, she is. So, when she finally realizes that he has been in love with her for a while now, Norma is pretty much the only person for whom that is news.

I loved the twist with why he chose to work for Norma, I will not give it away here, but I absolutely loved it. I liked that he was younger, I liked that he respected what she did for a living and was ok that she was not only successful, but also his boss.

I liked the time jumps, which I usually don't, but in this case they worked. Yes, it left me with a story that did not feel as deep as some of her other books, but it is a novella, so you know that going in...and what you got from this was a great story, great characters, and a little glimpse of Hudson before the Fixed stories...not a lot, but a little, and that was all sorts of fun. We like Hudson. And Boyd.

It was great to revisit the Fixed world for a bit, to get a little more of other people's stories in that world. And, Norma and Boyd were just plain fun. And hot...

The men at Pierce Industries...do you suppose that company is hiring? :)