A LITTLE TOO LATE BY STACI HART-EXCERPT REVEAL

A Little Too Late, an all-new romantic standalone from Staci Hart is coming October 24th!

I wasn't supposed to fall in love with the nanny.

When my wife left, she took the illusion of happiness with her, and I've been caught in a free fall ever since. For nine long months, I've been fighting to figure out how to be a single dad, how to be alone.

When Hannah walked through the door, I took my first breath since I'd found myself on my own. She slipped into our lives effortlessly, showing me what I've been missing all these years. Because Hannah made me smile when I thought I'd packed the notion of happiness away with my wedding album.

She was only supposed to be the nanny, but she's so much more.

The day my wife left should have been the worst day of my life, but it wasn't. It was when Hannah walked away, taking my heart with her.

Hannah The first time I saw Charlie Parker, I didn’t see one thing at a time; I saw all of him. It was an assault on my senses, an overwhelming tide of awareness, and for a moment, the details came to me in flashes over what was probably only a few seconds but felt so much longer. His hair was blond and gently mussed, his face long and nose elegant. I could smell him, clean and fresh with just a touch of spice I couldn’t place. I tipped my chin up—he was tall, taller than me, and I hovered just at six feet—and met his eyes, earthy and brown and so deep. So very deep. And then he smiled. He was handsome when he wasn’t smiling. He was stunning when he was. I was so lost in that smile, I didn’t register the flying gob until it whapped against my sweater. Tiny splatters of something cold speckled my neck. This was the moment the clock started again, and the sweet serenity slipped directly into chaos. A blond little boy looked up at me from his father’s side with a devilish gleam in his dark eyes. The spoon in his hand was covered in blood-red jam and aimed at me like an empty catapult. Several things happened at once. Charlie’s face morphed into embarrassed frustration as he reached for who I presumed to be his son. The boy—Sam, I guessed from the names I’d been given by the agency—spun around lightning fast and took off down the hallway, giggling. Another child began to cry from somewhere back in the house, and a bowl clattered to the ground, followed by a hissed swear from what sounded like an older woman. I glanced down at the sliding, sticky mess against my white sweater and started to laugh. Charlie’s head swiveled back to me, his face first colored with confusion, then in horror as he looked at the Pollock painting on my sweater. “Oh my God,” he breathed, his apologetic, wide eyes dragging down my body. “Jesus, I am so sorry.” I was still laughing, almost a little hysterical. I couldn’t even tell you why. I waved a hand at Charlie, and he took my elbow, guiding me into the house as I caught my breath. Another crash came from the kitchen, and a little girl came toddling out into the entry, leaving powdery footprints on the hardwood. Charlie’s face screwed up. “Sam!” he called, stretching the word, a drawn-out promise of consequences. A riot of giggling broke out in the kitchen. We both snapped into motion. I followed him as he scooped up his crying daughter and stormed toward the kitchen. The little girl watched me over his shoulder with big brown eyes, her breath hitching in little shudders and her small finger hooked in her mouth. Charlie stopped so abruptly, I almost ran into him. When I looked around him and into the kitchen, my mouth opened. I covered it with my fingers as laughter bubbled up my throat. A bag of flour sat in the middle of the floor, the white powder thrown in bursts against the surrounding surfaces and hanging in the air like smoke. The floor next to the bag was the only clean spot, shaped like a small bottom—the little girl’s, I supposed. A bowl lay upside down, its contents oozing from under the rim and slung in a ring from ceiling to cabinet to floor, as if it had completed a masterful flip on its way to its demise. And in the center of the madness stood an older woman with flour in her dark hair and dusted down the front of her. Clutched under her arm was a wriggling Sam, offending spoon still in hand. Her face was kind but tight with exasperation. “Please tell me this is the new nanny,” she said flatly. “I doubt we could convince her to stay at this point,” he said with equal flatness. 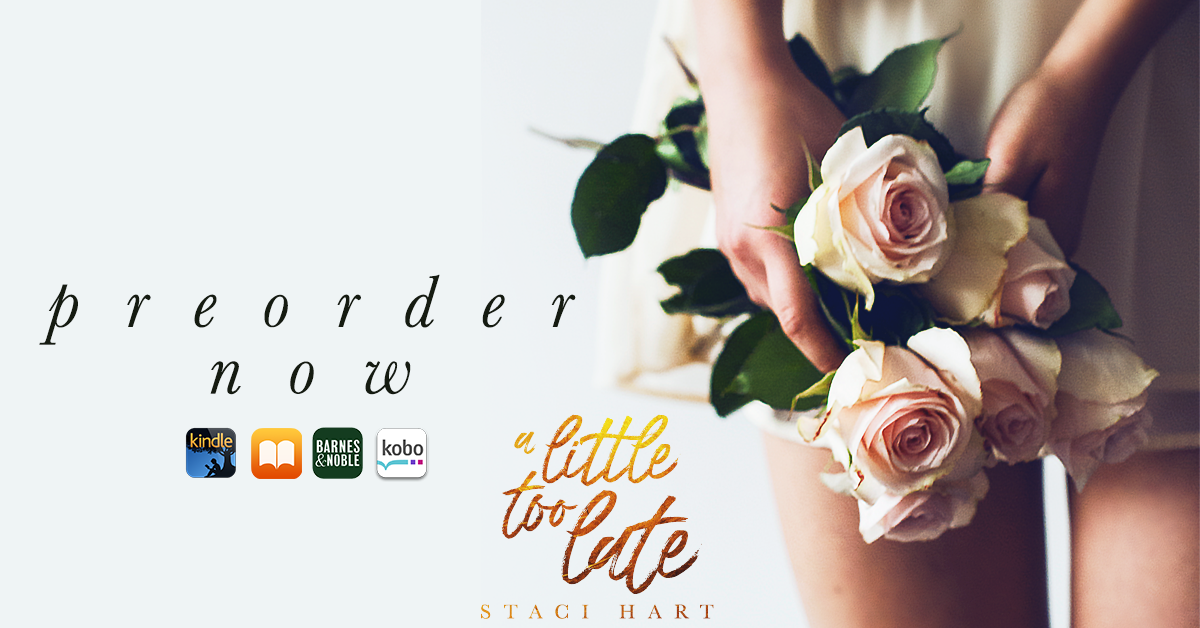 Amazon will be live October 24th, sign up here to get an email reminder: http://stacihartnovels.com/get-the-newsletter/

Staci has been a lot of things up to this point in her life -- a graphic designer, an entrepreneur, a seamstress, a clothing and handbag designer, a waitress. Can't forget that. She's also been a mom, with three little girls who are sure to grow up to break a number of hearts. She's been a wife, though she's certainly not the cleanest, or the best cook. She's also super, duper fun at a party, especially if she's been drinking whiskey. From roots in Houston to a seven year stint in Southern California, Staci and her family ended up settling somewhere in between and equally north, in Denver. They are new enough that snow is still magical. When she's not writing, she's reading, sleeping, gaming, or designing graphics.

Make Me Yours by Melanie Harlow - Release Blitz

Make Me Yours, an all-new laugh out loud rom com from USA Today bestselling author Melanie Harlow is available now! He’s my bro...