TURNING UP THE HEAT BY ERIKA WILDE-REVIEW 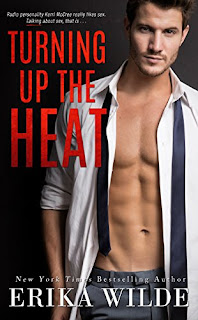 Kerri knows firsthand that you can hide a lot behind a microphone. Although she's earned a reputation for discussing every aspect of sex on her show, she's never had to back it up . . . until a sexy mystery caller proves to be even more irresistible in person.

Ian Carlisle is immediately intrigued by the sultry voice he hears on the late night radio show, and it doesn't take him long to arouse Kerri's imagination with his dirty talk. Now he's turning up the heat and seducing the rest of her. Their on-the-air chemistry sizzles and they heat up the airwaves, debating any and all provocative issues possible. As the ratings soar, so does the sexual tension.

But will Ian do when he discovers Kerri's not the sex expert she professes to be?

Originally published as Heat Wave under the name Janelle Denison

This is a re-issue of a book written a few years ago, and it is done very well and seems modern, like it was written in 2017. But at the same time, kind of like a movie that was filmed in the 80s feels like a movie from that decade, this one felt like this too. There was a retro feeling about the situations and the feeling of the book that I enjoyed.

I liked Ian and Kerri and I loved the idea of the attraction between them being explored over the radio before there was an in person relationship. The exploration of the attraction of what worked for each of them and how things could be with them, and the idea that this was all explored without in-person contact gave the reader a kinship with the characters, and I think this made the title relateable.

There was a lot going on with the secondary characters, and at times I thought there was a little too much and the scenes felt a little long, but at the same time, I felt that the relationship with Ian and Kerri was developed.

I loved the ending. Was it a little predictable? Yeah, it was. But it was also important that it ended that way and it worked...as it was the way I think it would have progressed if they were real people. And, when I can believe the characters are real, I am definitely more engaged with the book.