FLY WITH ME BY CHANEL CLEETON-SPOTLIGHT REVIEW 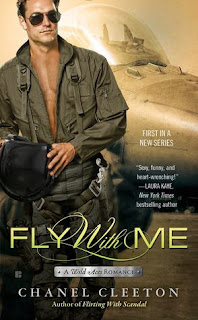 From the author of the Capital Confessions Novels comes the first in the steamy Wild Aces Romance series.

U.S. Air Force fighter pilot Noah Miller—call sign Burn—loves nothing more than flying hard and fast. When he meets a gorgeous and sassy woman while partying in Las Vegas, he immediately locks on to her.

Jordan Callahan owns a thriving clothing boutique, but her love life is far less successful. Her luck changes when six feet, two inches of sexy swagger asks her to dance and turns her world upside down.

One scorching weekend becomes an undeniable chemistry that they can’t leave in Vegas. But the long distance relationship and their different lives threaten to ground their romance. And when the dangers of Noah’s job become all too real, Jordan learns being with a fighter pilot means risking it all for a shot at love…

I am not sure what I was expecting, but wow did I get a heck of a book.

When you try out a new author, it is a bit of a gamble, will I like the writing? The story? Will I be able to engage with the characters; the writing style; the story itself?

You like Noah and Jordan from the very beginning, and you can feel their connection. Their attraction is electric and it jumps off the page. The scene in the nightclub is wonderful, you feel that connection between them and it is written so well, you feel like you were there for the beginning of their love story.

It is not a shock when neither of them want what they have to end when they leave Vegas. And, the author leaves enough breadcrumbs in the way they are behaving that you see this coming. Jordan doesn't want this to be a one-night stand, she wants Noah to make some effort. And he does, enough that Jordan and the reader are convinced that there is something between them that is a lot more than just a weekend Vegas fling.

But Vegas was easy.

Then things get real, they get tough, they become work, and disappointment, and heartbreak, and struggle. The characters have to really work for their story to continue, but you never doubt for a second it is what they each want. Real life intrudes...the one where she owns a store in Florida and he is a fighter pilot in Oklahoma...for now. As he makes clear, his life is not his own, and that any sacrifices that are made for the relationship have to be made by her, out of necessity, because he does not have the say to make changes in his.

I didn't know that this story actually mirrors Cleeton's actual life until after I finished and read her bio on Amazon, but I did have the impression throughout the story that she knew what she was talking about, that the struggles felt authentic.

I loved that the drama in their relationship really didn't come from them...Noah means it when he tells Jordan that he is not going anywhere.

The way he finally tells Jordan that he loves her was so perfect, so wonderful and felt so real.

For me, what draws you in is the way this story is told in a series of little moments, flowers, the mustache, phone calls, spontaneous emotional confessions, missed events and visits...some of them are bigger than the others, but in the grand scheme of things, none of them life-altering. it is the way they are strung together that allows these series of small, human moments to string together to create a very big love story. This just felt real. It felt like the life lived by people I know.

This is a re-read...for the story and the emotion. In fact, I have already re-read it.