UNDER FIRE BY SCARLETT COLE-BLOG TOUR 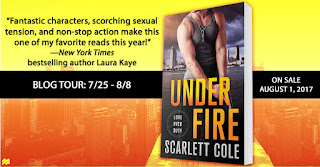 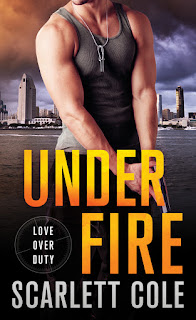 RITA nominee Scarlett Cole’s Under Fire pairs a hot Navy SEAL with a medical researcher who finds herself in too deep.
Hot, hard-bodied Sixton Rapp is a former SEAL who’s raring to begin his brand-new civilian life. He and his Navy “brothers” start a security firm that offers the kind of services only a team of military-trained professionals can provide. But nothing prepared Six for his new client: an innocent woman on a mission to improve thousands of lives. . . unless someone takes hers first.

Dr. Louisa North knows time is against her as she tries to create a “miracle” medical treatment for a disease with no known cure, until she creates a sample so powerful that the wrong people want to use it as a chemical weapon. At first, Six is unwilling to accept Louisa as his client. But soon he realizes that the danger is real and that there’s much more to this plain-Jane scientist…including a burning passion between them that neither of them can resist. And now that an enemy is on Louisa’s trail, Six will do whatever it takes to protect her—or die trying.

Sixten and Louisa were interesting. I liked them separately as characters, although some of the technical dialog was a little difficult to follow. That said, i think that was the point, and as being able to understand her when she gets nervous was part of bringing the reader into her as a character.

Unfortunately, for me, she was a little too awkward for me to believe the relationship with Six. I believed the initial attraction, and there were parts where I think there was a chemistry, I was not convinced they were going to make it as a couple for the long-haul.

That said, I liked them in the now. The story was interesting, it was fairly well paced and the suspense was effective. The dialog was realistic and I was able to believe it and the situations, even when it was her scientific speak that went totally over my head.

“Now that you’ve got a little more color in your face, and you’ve stopped shaking, you want to tell me who those men were, or what they wanted?”

Louisa smoothed her hands down the front of his chest to fix his rumpled hoodie and then straightened the hem. Six grabbed her hands in his and stilled them. His hands were the size of baseball mitts compared to hers.

“I don’t know for sure. They beat you in here by a minute or two at most. They told me that they wanted me to go with them, and that was about it. I don’t want to think this has something to do with the missing sample.”

Thoughts crowded in almost too quickly to process them all. Things like this didn’t happen to her. It went against the rules. Her rules that said she would spend her life doing research away from all the horrid stuff that went on in the world. And shit like this certainly didn’t happen in Mission Hills. She wondered if it was smart to keep the fact that she’d swapped the two samples and disposed of the one they seemed to be after five days earlier from the police when they finally arrived. But this was a golden opportunity to find out where the police were with the theft in the lab. Obviously Six had saved her life, but she didn’t want him to get into trouble for shooting one of the men. She wasn’t even sure how that would work. It wasn’t like he was defending his home. He was defending hers with a gun he’d brought with him which she wasn’t sure was even legal. Crap.

“It’s all such a mess,” she whispered against Six’s shoulder.

“I know. But I’m right here with you,” he said softly.

Her heart pounded again and her head felt groggy, like mud, as though she was hungover. What she really needed was some silence. She tried to pull away from Six, but he wouldn’t let her move. “Let me go,” she said, blowing her bangs out of her face.

Six shook his head slowly. “I don’t know what’s going on, but you’ll walk the police through it step by step, and I’ll tell them what I know. Then we’ll figure out how to make you safe tonight. Then in the morning, I’ll help you figure out what you can do to remain safe while this gets sorted out.”

What if they came back? Oh, God. She hadn’t thought that far ahead. She could go to her mother’s home, but that might lead the people that were after her to her family. Damn. Why had she already decided it was about the sample when it could have been an abduction attempt or an armed robbery, which didn’t make her feel less vulnerable but did quash all the conspiracy theories in her head? What if she was excluding options that were important? She was the daughter of a very wealthy widow. Ransom could be a possibility.

Six squeezed her shaking hands, bringing her back to the present. “And just so you know, staying safe means learning to protect yourself, sweetheart.”

“I did just fine,” Louisa huffed, unwilling to take on the mantle of victim she was constructing in her head.

“You held a rolling pin,” Six said, shaking his head at her. “What were you going to do, Betty Crocker them to death?”

She pushed her hands against his chest, and this time he let her go. It had never occurred to her that someone would violate her home, but Six was right. If she looked at it logically, she obviously needed to upgrade every element of her home security. She couldn’t even remember when she’d last opened the window in the dining room, but she’d obviously become lax in locking it afterward. And none of her external security lights had come on, which meant they either weren’t effective or the sensors were pointing at the wrong places. And her alarm had the ability to be on for just the doors and windows when she was home but awake, yet she never—

“What’s going on inside that head of yours?” Six asked. “Because you disappear inside it sometimes and I worry when I see you start messing with things.”

Louisa looked down at her hands and realized she was restacking the coasters she had placed on the marble. “I was just thinking through what you said. I guess I’ve become a little lazy … I’ve stopped worrying about home security because nothing ever really happens here.”

Since her father’s death, she hadn’t had anyone to count on. Not like this. “Why are you really here, Six? It’s not about my uneven shelves, is it?” she asked quietly.

Six studied her face, taking in her forehead, her cheeks, and even her neck before meeting her eyes. It was a moment that felt much longer, filled with … something. Potential, maybe. “Because you asked me to help, and—”

He stopped talking at the sound of wheels pulling onto the gravel. Quickly, he shut off the kitchen light, and it became apparent that the exterior lights were on. With a swift jog, gun drawn, he hurried to take a look out the window. Blue and red beams of light flashed onto her kitchen wall. They were the best thing she’d seen all day, well, other than seeing the door to the kitchen burst open and Six rolling in, looking as deadly as any soldier she’d ever seen. In hindsight, now that the danger had passed, she realized he’d looked hotter than any Hollywood action star in a big blockbuster movie.

Even as she wondered what other reason he’d been about to give her for being there, she realized that none of his words, or the arrival of the police, meant she was safe. 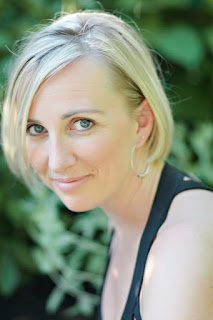 Born in England, Scarlett Cole traveled the world, living in Japan and the United States before settling in Canada where she met her own personal hero – all six and a half feet of him. She now lives with her husband and children in Manchester, England where she's at work on her next book. She is the author of The Strongest Steel.