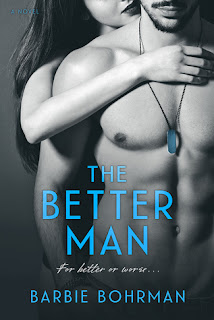 He’s ambitious, too smart for his own good, and very single.
Nicknamed “Max-A-Million” by society gossip types, he thinks he’s got it pretty damn good and he’s right…for the most part.

Meet Daphne Rodriguez.
She’s ambitious, too smart for her own good, and very single.
She works extra hard for everything she has and never complains about the crappy hand life has dealt her.

When Max is presented with the opportunity of a lifetime, it comes with the condition that he must work with the one person he despises most…and wants the most: his sworn enemy, Daphne.

However, Max has no plans of giving Daphne the satisfaction of ever letting her know how he feels about her. Instead, he vows to make her life miserable at every turn.

Which works out perfectly, since Daphne has no intention of making it easy for Max either.

When all hell breaks loose and they’re on a collision course with disaster, these two stubborn people will have to overcome their mutual hatred of each other long enough to work together and get the job done.

For better or worse, they will have to rely on each other to save themselves…and the people they love most. 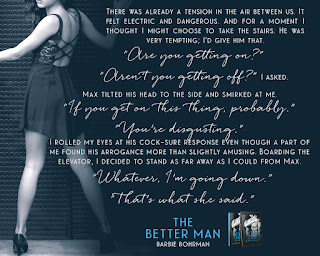 This book snuck up on me. And, I admit, I ended up liking this as much as a certain reality star likes himself (I promise, this will make sense when you have read it, and you will laugh).

Max, well, at first I was not the biggest fan of Max. I think I felt the way Daphne felt about him, like he was really attractive and split his time being charming, being a jerk, and being a dork. The charming and the slightly dorky, well those are ok, but the jerk...well he elevates that to "Max is an ass level" often enough that he is a little difficult to get over.

Daphne sees right through him. And, she assumes the worst about him in a number of situations. And, it is hard to blame her, as he comes across exactly like the jerk you think he is. But, then she starts to get to know him, and she finds out that underneath all of the surface stuff, he is a nice guy.

So, then the author has a challenge. How do you sell an enemies to lover romance in which you don't really like the hero all that much, and you sort of side with the heroine with the reasons she doesn't like him?

Answer: You write this book as well as Bohrman does and that solves the problem. You write characters the reader likes, and connects with. You tell a story in which you get to like the characters through the evolving view they have of one another. And, you make sure there is a shift that is realistic, that the chemistry is there, and that you are willing to believe in the change from hate to romance. It also matters that the characters admit their feelings toward one another.

I loved the conversations that they have, and the acknowledgement of the hate that has turned into something else. I liked that they kept their "edge" and that the romance didn't turn either Max or Daphne into totally different characters.

I also really liked the way the author handled the main conflict, the "big fight" so to speak. It had to be something that you believed, but at the same time, not enough that you lost the belief that the characters were meant for one another. This was done perfectly.

At the beginning, I wasn't sure what I thought, as I mentioned. By the end, my heart was in my throat, I was cheering and I was sniffling. What more can I possibly want from a book? Well, the author answers that with the preview of the next book. Now, I want the next book.

For every person who didn’t like me, there were a lot more who adored me. That had to count for something, right?

“Of course, mate. Of course,” Oliver said. “Then you know what some of the male viewers have been saying, yes?”

I was blessed with the looks of a fucking Adonis, so yeah, men usually hated me anyway. I paid their bullshit complaints little to no attention at all. Let me put it this way, if I had a nickel for every single time some guy was jealous of me, I’d be rich.

Shrugging my shoulders, I replied with ease, “A few haters never killed anyone.”

“Let’s see, shall we?” With another click or two on his keyboard, Oliver then announced, “Here’s one tweet that says, ‘Max Allen needs to get hit by a bus. #pleasebabyjesus.’”

“That’s not so bad,” I said through a chuckle. “I’ve heard a lot worse. Hell, I think my big brothers can come up with better ones.”

Oliver ignored me and kept right on reciting more tweets. “Here’s another one, ‘It looks like his face caught on fire and someone tried to put it out with a fork.’ And another, ‘I wish Max Allen’s mom would have swallowed instead.’”

He was starting to cackle like a hyena. “All right, I get it, boss. Men don’t—”

“Wait, wait,” Oliver managed to say between his laughing fit. “One more, ‘Max Allen has more dick in his personality than he does in his pants. #dickless.’”

“‘Max Allen looks like two pounds of shit in a one pound bag.’” Oliver was laughing so loudly he had to stop for a second to gain his composure. “Oh, and this one! This is my favorite, mate, ‘If Max Allen could suck his own dick, then he would finally suck at everything. #eatadick #buteatyoursbro #suckyourdick #maxsucksdick #dickdickdick.’”

Oliver was having the time of his life reading off these awful tweets about me, super loud, too. So loud that his assistant and the assistant to his assistant, or intern, or whatever the fuck they were to him, were cracking up. One of them yelled out, “Dude, you have to go to the Twitter feed right now!”

And then, like a wave of dominoes falling over, one by one, the rest of the office was reading the same tweets and laughing their butts off. Thank God I had thick skin, or I would take it personally.

“All right,” Oliver wheezed while he wiped the tears from his eyes. “Oh my God, those are priceless.” 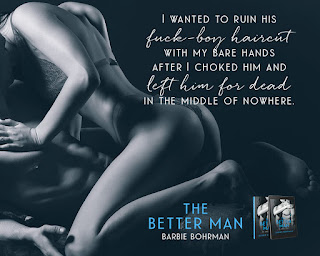 Born and raised in Miami, Florida, Barbie Bohrman dreamed of becoming an author. Long after she had given up, a book club’s prologue contest enticed her to give it one more go. What emerged were the beginnings of her debut novel, Promise Me. Now she’s living her dream and writing stories that entice readers to escape and break away from reality. When she’s not writing, you can find her trying to get through the books on her Kindle (more than a thousand at last count) or watching Sherlock or Seinfeld. She currently resides in New Jersey with her husband and two children.
Posted by M at 8:00 AM