THAT THING YOU DO BY KAYTI MCGEE-REVIEW 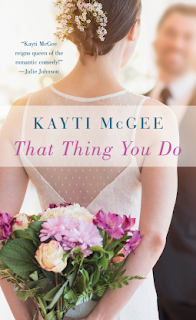 Friends don’t let friends marry the wrong man. But where, oh where, is Mr. Right?

In high school, Greta Steinburg and her two BFFs made a pact: none of them would get married unless they all approved the man in question. Since then, Greta has had her fair share of romantic ups and downs—but now, after her latest failed relationship, she is done. Greta announces that her days of dating are officially over, and she’s kissed the idea of happily-ever-after goodbye. . .

Of course her friends will hear none of it. Instead, they insist that Greta go out with Jon, the hottest new DJ who just happened to be at her sister’s wedding. To get her friends off her back, Greta proposes that they pretend to date. The only problem is, for every fake date they have—from feeding angry rhinos to crashing a kiddie roller-skating party—Jon wants a real one. Each time they get together, their attraction grows. . .and soon there’s no turning back. Could it be that true love requires a leap of faith—and that Jon is the one Greta’s been waiting for all along?

Kayti McGee's That Thing You Do is a charmingly sexy novel about finding love in the least likely place.

Kayti McGee is a favorite of mine. Her characters are fun, they are quirky, and her stories always feel just slightly different than other books out there in the romance genre.

Jon and Greta meet at a wedding, as part of a "fake" dating arrangement, and then life becomes a little more real, as life often does while you are trying to make other plans, or as Greta was, avoid something by being a little less than forthcoming.

I am not sure why, but he felt a little flat to me...and there is something he does at the end that really turned me off to him. It was in his personality to behave that way, and it was in Greta's to forgive him, but the connection with the hero was never really there for me.

That said, I enjoyed this overall...and as this is the start of a series (or at least looks like it has the potential to be) I do recommend it. There is definitely a heart here, and there is a heartwarming relationship as well as a story of growth for Greta, which was a lot of fun to experience.

Kayti McGee writes romantic comedy in varying degrees of ridiculousness from beautiful Kansas City, Missouri. Go Royals. Besides writing, her hobbies include travel, cooking, and all things Whovian. She also writes as the latter half of Laurelin McGee. Like her co-author Laurelin Paige, she joined Mensa for no other reason than to make her bio more interesting.

Pre-Order That Thing You Do

Labels: 3 Stars, Kayti McGee, Review, Review by Laura, That Thing You Do