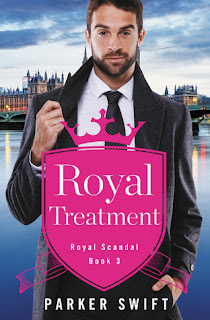 
All this duke needs is his duchess...


For five blissful months I've been engaged to Dylan Hale, the most handsome, commanding, and wickedly sexy duke in England. For five months I've woken up next to the man I love, indulged in secret trysts, and submitted to every delicious desire. Even better? We've managed to keep it hidden from everyone. That means no paparazzi scandals, no snide comments from Dylan's mother, and no harsh public scrutiny. It's been heaven, but with Dylan's royal responsibilities looming, our time alone is running out. And while I can't wait to be Dylan's wife, I'm terrified that becoming Dylan's duchess might mean losing myself.

This is book 3 in the story of Dylan and Lydia.  It's definitely not a standalone, as it picks up after the events in the other books, their first meeting, the beginning of their relationship, and all of the build up is referenced in this book, vaguely, but you need to have read the first 2 in order to really follow.

I was invested enough in Dylan and Lydia to want to know how it ended up for them, although I can say that I thought it was a little too long and the book would have worked better, I think, as a duet.

The emotion, at least for me, felt a little drawn out and like there was not quite enough for them to really have the plot to make it through the 3rd book and the break up, make up and issues started to feel a little like a soap opera...the issue exists because it is the 4th chapter of the 3rd book and not because it really follows a strong story ARC.

I recommend this book, as it is the end of a series and the first 2 books really were engaging, but this one was not as compelling as the others in the series.