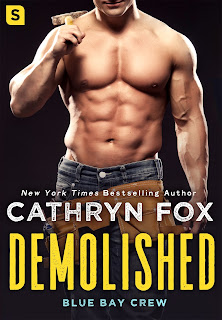 Summer Wheeler is on the run. Hiding from the men who killed her father, Summer is on her way to her childhood cottage in Blue Bay when she runs into Sean Owens, the forbidden bad boy from her past. After giving him a fake name, she gives in to one steamy night with him, never expecting to see him again.

Sean isn’t sure why Summer is pretending to be someone she’s not, but he’ll play her game if that means he can indulge in one of his oldest fantasies – a night with Summer. He’s shocked to see her when he returns to Blue Bay, and even more surprised when Summer offers him a job renovating her old family cottage. Hot workdays turn into hotter nights, but when Summer’s secret catches up with her, she’ll have to decide if she can trust Sean with her heart—and her life.

Demolished nails the perfect combination of emotion, scorching intensity, and a touch of suspense that will draw readers to this fantastic new series!

Summer and Sean knew one another years ago, and there was a mutual attraction that was never acted on...and then there is a one night stand, mainly because there isn't a lot of thought given to why they are each in the area. But, ok, fine...erotic romance sometimes requires that slight lack of communication to get the characters into the same place.

And, they burn up the sheets, and the showers, and the sidewalks..and that is a lot of fun.

Is this the best book I have ever read? No. And, other than a threat from her past and some things ar the end, there really isn't a lot to the suspense, but it is a workable plot device to continue putting them into the same room, which I enjoyed.

Overall, I enjoyed the story. The writing is strong and while the plot is sex driven, there is also some character development...and at the end, you believe they are attracted to one another.

I can hardly believe I’m walking out of a Dick’s Inn and Diner—and hopefully into one of its rooms—with sweet Summer Wheeler, the girl I’ve always crushed on but couldn’t do anything about. Christ, back in the day two years might as well have been a chasm, but today, not so much.

Jesus, she’s gorgeous. Has lush curves that every guy’s dreams are made of. Her once blond hair is now as dark as the night sky, rich, luxurious, citrus scented, and damned if I can’t wait to see those curls spill across my pillow. She still has that sprinkling of freckles on her nose that make her look young and adorable, and those lips . . . Goddammit, never have I seen lips that were so plush, so damn kissable. A bolt of lust hits like a sucker punch, and my body trembles, anxious to taste her heat, to discover what she’s wearing under her professional clothes. Fuck, it’s all I can do not to back her up against that big truck of hers and take her right outside in the parking lot.

Yeah, sure, I’m supposed to be getting my shit together, turning over a new leaf, becoming a productive, upstanding citizen of Blue Bay and every other stupid fucking idiomatic expression that meant I needed to do better for my family. But I’m not in Blue Bay yet, headed back to a place where everyone knows my name—and the cops don’t like me—to take over my dad’s construction business. Yup, I get it, it’s time to step into the role I’d been groomed for since I could hold a hammer, and spend less time on the road satisfying my own selfish urges. When I get home I’ll be on the straight and narrow: no women, no distractions, and no trouble with the law. Until then, however . . .

I put my hand on the small of her back and the heat that fires between us is almost catastrophic. Jesus. Who’d have thought that after all these years there’d still be such a powerful pull? I shake my head. Chemistry like this doesn’t come along every day.

The warm night air falls over us as I push the lounge door open and guide her into the night. I pause and glance up and down the long strip of black street. I’d been in this Podunk town in the past, circling through as I went from one sponsored motocross event to the next. Hell, all I need is a place to lay my head, but seriously what is Summer really doing in a shit place like this? Designer clothes. Expensive truck. She is so out of her element. Where exactly is she headed, and who is this friend she’s visiting? More importantly, why is she pretending she doesn’t know me?

I’m pretty good at reading people and I spotted the recognition flashing in her whiskey-colored eyes the second I met them. Then again, maybe she doesn’t want to acknowledge me because . . . well . . . because for her, this is just a quick hot affair as she passes through town. Fine, if she wants to play it that way, I can, too. No names. Anonymous sex. This isn’t my first rodeo and all cards on the table, it’s for the best. I don’t have time for more.

“This town doesn’t have much, but there’s a pizza joint two blocks down. It’s decent.” Her dark lashes flash over darker eyes, meeting my gaze straight on. She doesn’t even look like she’s breathing, which gives me the distinct impression that this isn’t something she does on a regular basis. I brush my knuckles along her arm, and she shivers. “Unless you’d prefer to just—”

My cock throbs. Apparently little Sean prefers that, too. I pull a key card from my back pocket, and the letter stuffed inside nearly falls out. I shove it back, not wanting to think about the stabbing pain behind each written—and unwritten—word. Later I’ll wallow in my own misery, kick my stupid fucked-up ass, and condemn myself for my selfish ways. Christ knows there’ll be plenty of time for that in the coming months.

She grins at the cheesy comment, the tension easing a bit from her body. “Yours.”

New York Times and USA Today bestselling author Cathryn Fox is a wife, mom, sister, daughter, and friend. She loves dogs, sunny weather, anything chocolate (she never says no to a brownie), pizza, and red wine. Cathryn has two teenagers who keep her busy and a husband who is convinced he can turn her into a mixed martial arts fan. When not writing, Cathryn can be found laughing over lunch with friends, hanging out with her kids, or watching a big action flick with her husband.