SOME KIND OF HERO BY SUZANNE BROCKMANN-REVIEW 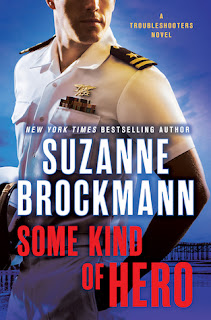 Navy men don’t come tougher than Lieutenant Peter Greene. Every day he whips hotshot SEAL wannabes into elite fighters. So why can’t he handle one fifteen-year-old girl? His ex’s death left him a single dad overnight, and very unprepared. Though he can’t relate to an angsty teen, he can at least keep Maddie safe—until the day she disappears. Though Pete’s lacking in fatherly intuition, his instinct for detecting danger is razor sharp. Maddie’s in trouble. Now he needs the Troubleshooters team at his back, along with an unconventional ally.

Romance writer Shayla Whitman never expected to be drawn into a real-world thriller—or to meet a hero who makes her pulse pound. Action on the page is one thing. Actually living it is another story. Shay’s not as bold as her heroines, but she’s a mother. She sees the panic in her new neighbor’s usually fearless blue eyes—and knows there’s no greater terror for a parent than having a child at risk. It’s an ordeal Shay won’t let Pete face alone. She’s no highly trained operative, but she’s smart, resourceful, and knows what makes teenagers tick.

Still, working alongside Pete has its own perils—like letting the heat between them rise out of control. Intimate emotions could mean dangerous, even deadly, consequences for their mission. No matter what, they must be on top of their game, and playing for keeps . . . or else Pete’s daughter may be gone for good.

I enjoy Suzanne Brockmann, a lot.  And, I have read most, if not all, of the books in this series.  She intertwines multiple characters and events seamlessly, and in a way that is a lot different than any other writer I can think of, hence why I enjoy her.  There is a trick to writing about a lot of characters, and this many books into the series there are a lot of characters, without losing the plot of the story.  In this one, while there were places it didn't work as well as it has in her other titles, it was effective and interesting.

Peter and Shay are the central characters of this story, although there are numerous appearances of characters from earlier books, which is fun if you have read them and not a distraction if you haven't as this book is self contained and can be read as a standalone.

Shay is a romance writer and I was looking forward to the edge this was going to give the novel.  I did enjoy when they decided to try out one of the scenes from her book, just to see if it was possible.  But, I thought the internal dialog with one of her characters, and the fact that she answered him, was odd, a little off putting, and it pulled me out of the story.

I get the idea of Harry, but the execution of it pulled me out of the story enough that i felt there was a connection that I was missing with Peter and Shay, and that the romance wasn't quite what it could have been.  I think, for me, the time for them to build their relationship was so short that the inclusion of the rather odd internal dialog caused the relationship to feel like it was stalling.  And, being pulled out of a book when the relationship takes place quickly can make it difficult to maintain that connection with the characters.

I didn't dislike this book, but it isn't one of my favorites by Ms. Brockmann, although I do recommend it.

Buy The Book
Amazon
Posted by Booked All Night - Laura at 11:00 AM