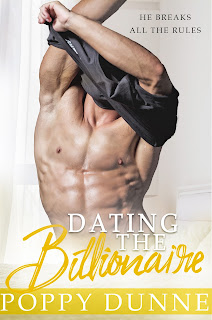 I'm Dahlia Rossi, dating coach extraordinaire. I know how to land you the man of your dreams. Follow my rules, you'll meet the love of your life and have a gorgeous destination wedding in French Polynesia. Okay, that last one happened just the one time. But my rules work every time. I guarantee it.

1. The man makes the first move. Seems unfair? Life's unfair.
2. Never have sex on the first date. No, not even oral. And hands above the table, please.
3. Play hard to get, but don't make it too hard.

Solid rules, right? I thought they were. But then I met Jack Carraway, an impossibly sexy, frustratingly unpredictable billionaire, and broke them all. Everywhere. In an elevator. On a balcony. Beneath a gazebo, of all places.

Whether I like it or not (spoiler alert: I like it!), Jack is taking me on wild adventure and we're writing a whole new set of rules. Like, always reserve your matching Harry Potter costumes a week in advance; wrestling swans is not as easy as it looks; and sometimes, the man of your dreams pops up in the most unlikely of places and has a really big...boat.

After years of watching couples find love, it may be my turn. But is this spontaneous playboy the real thing, or just a fun detour around my predictable life? All this time I've been following my own rules and going to sleep alone, with nothing but my second slice of princess cake to keep me company.

But the more time I spend with Jack, the more I learn that rules...they're meant to be broken.

In love there's only one rule: there are no rules.

Poppy Dunne is an automatic one click author for me. When I saw this blurb I started grinning-I knew it was going to be a fun ride. I definitely wasn't disappointed. This book was fun, sexy, and a pleasure to read.

I really felt a connection to Dahlia. She's a rule follower, a list maker and an interesting dating coach. I was intrigued by her rules and enjoyed getting to the root of why she needed these rules to live by. Her dating approach is do as I say, not as I do-even before she meets Jack. I say that because she's a single dating coach-I believe she would have followed her rules to a T before meeting Jack. Seeing her discover, and acknowledge, her true self was a joy.

Jack...I think every woman wants to be swept off her feet by someone like Jack once in their lives. He's fun, flirty, and he's sexy. His money was an afterthought to me-though I wouldn't mind flying on his private plane. While there were times I wanted to shake him his heart was usually in the right spot. Jack had some growing up to do and I enjoyed seeing that play out.

There's an instant spark between these two. It sizzles and pops right off the page. Their sexy times are absolutely sexy and hot. I adore it. But outside of the bedroom they taught each other important things as well. I was fully invested in them as a couple, rooting for them from the sidelines. I appreciated the real struggle these two faced with each other and watching them overcome their differences.

The writing here is sharp. It's witty and it's fun. The plot is refreshing, the secondary characters are sometimes an absolute hoot. I enjoyed every minute of reading this book and finished it in a day. It was a fast, fun and sexy read and showed me again why Poppy Dunne is a one click author for me. I recommend this book.

Rules can give you a sense of direction, they can give you a way to feel that you are doing what you are supposed to be doing in a situation that is not clear. And, rules are the same for everyone. That's the whole point of having them.

Dahlia believes in rules. They keep her safe, and she has convinced herself that they are necessary. So necessary, in fact, that she has a career that is built on teaching others to follow these same rules, and to not deviate from them.

So, what happens when Dahlia meets Jack, the epitome of a rule breaker? Well, swan attacks and nights in capes, for starters. Yup. Swans apparently attack. Who knew. And, capes also come in adult sizes. Who knew? For details, you will just have to read the book. I know you are curious, because, attacking swan.

Jack has no rules. Jack has money and when you have as much money as Jack, it isn't that you have no rules, it is that the rules are different when you can buy pretty much anything that you want, towns and islands included.

Dahlia and Jack really, on the surface, shouldn't work. The only rule he has is that he breaks all of them, a point that comes up over and over in the story. In a lot of ways, Jack isn't totally grown up. He knows he has rules, and that other people have rules, and that his rules are different. But, and this really is the core conflict for Dahlia and Jack as a couple, he doesn't understand that there are some people who like their rules and don't want him to use his money, his name, his anything, to go around them.

In order for Jack and Dahlia to work, he has to understand that just because he can get away with just about anything doesn't mean that he should (isn't that adulthood in a nutshell?) and Dahlia has to realize that rules aren't one size fits all, that some rules are meant to be broken, that some people have different rules, and that sometimes that isn't a bad thing.

It's not an easy journey for either of them.

I did, sadly, have a small issue with the pacing in this one, a very small issue, but to me the realization for Jack that his rules were not the same, and that not everyone lives in the world of his rules (or wants to) was a little too quick. I know, this had to happen, and it did need to happen...but I thought that it was a little too easy. Not a huge issue, and not one that will stop you from loving the book.

Poppy Dunne is a wonderful writer. Her stories are fun, and they are funny, and they are fully of a certain whimsy that makes you just enjoy them. There are a lot of Harry Potter references in this one, and I find this to be very fitting. The things that her characters think, and say, and do, fit in so well with the Potter world, not just in this book but in her others...you feel fully transported in the story, and really there is nothing better. 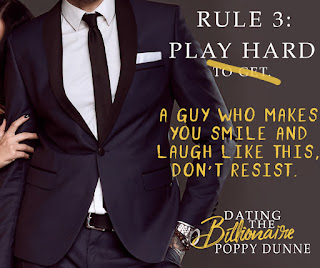 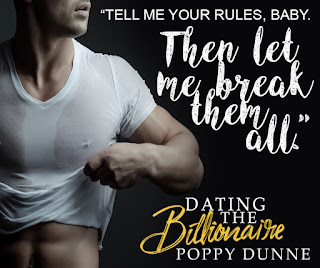 Poppy Dunne writes books with relatable heroines who speak their minds and whose riotous inner dialogue reflects their complex characters. Her goal is to deliver a story that has equal parts heart, romance and humor. Her heroes are swoon worthy, yet hold on to your suspension of disbelief, because they pick up their own socks and cook.

In her free time, she looks for hobbies other than Netflix and procrastinating to fill out this author bio. She lives in Los Angeles with her husband and two children.