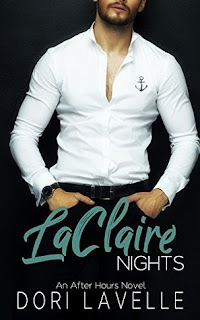 Some marriages last a week, a month, or a year. Others last a lifetime. Mine ends on my wedding night, ten hours after the exchange of rings.

Our marriage vows shatter when Dustin Cardwell, the man I saved myself for, looks me in the eye and tells me I failed between the sheets.

Three months later, I'm divorced and working as a massage therapist on the LaClaire Cruise Ship, headed for the Caribbean. I'm desperate to get away, to lick my wounds in private. I'm not looking to be another man's disappointment.

Until Bryant LaClaire invades my space and makes my panties melt. The moment our eyes meet, he makes it clear I'm his girl of the moment.

Drawing me in with his charm and good looks, he promises to repair my sexual self-esteem while satisfying his own needs. A few LaClaire nights is all he can give. Nothing more, nothing less. It’s an offer my body can’t resist.

But when my heart lures me into the heart and world of a man who carries a devastating secret, I know I’m in danger of returning home with more pain than I'd left with.

LaClaire Nights is a steamy full-length, standalone novel with a happy ending.

The idea of this book was a lot stronger than the execution.

I liked the idea of a heroine who was saving herself for the wedding, that it was important to her.  I thought Grace had a lot of potential to be a different and refreshing heroine, and that it was going to be interesting to see Grace and Bryant together.

That said, I thought the characters were all over the place.  She goes from saving herself, to being humiliated on her wedding night, to divorced 3 months later, to willing to have premarital sex with someone else, to having a baby while not married.  I get it that things happen to change who you are, but not this much.

Bryant was never real to me.  He checked all of the "expected" boxes but was lacking in substance.  There was an effort to make him seem like he had more depth with the brother story-line, but this fell flat for me as well.

The mother and Dustin, Grace's ex, were over the top.  The mother was not interested, at all, in knowing what happened to destroy her daughter's marriage...she just kept saying she should have stayed with the man she married.  And, Dustin, apparently married her just so he could have sex with a virgin.  because, when you are in a strongly Christian small town, this is the only option you have.  Or something.

But, somehow, in order to redeem Grace, Dustin had to be a criminal and her mother had to find this out...then, and only then, was it ok that she divorced him.  This bugged the heck out of me.  Add in the unbalanced characters and the rather choppy dialog and you have a book that had a lot of potential.

Unfortunately, I am not able to recommend this title.

Buy This Book
Amazon
Posted by Booked All Night - Laura at 1:00 PM