ABOVE AND BEYOND BY KATHRYN SHAY-RELEASE BLAST

A family of heroes, all in dangerous jobs, all irrevocably tied to those they love. Read about the Marino clan in this fast-paced, emotional new series, To Serve and Protect, by NYT bestselling author Kathryn Shay.
Nick Marino is the top guy on POTUS’s Secret Service detail. But he’s temporarily sent to upstate New York to guard the president’s sister, Isabelle Barton, who is being threatened in anonymous notes. There, Nick becomes involved with the widowed mom and twin boys, who quickly win over what he thought was his hardened heart. Amidst the heightened anxiety of tracking down the threats, the constant vigilance and an ever-growing sexual attraction between Isabelle and Nick, these two people must uncover not only the plot against her, but determine what to do about their impossible romance.
ABOVE AND BEYOND provides a deep dive into the life of a Secret Service agent and a close look at being related to the most powerful man in the world, along with the glamor of Washington, D.C. politics. The story will keep you interested and capture your heart.

I enjoy Kathryn Shay as I like the grittier and more realistic look at the Secret Service and this is exactly what you get in this book.

Nick is the agent in charge of the protection for the president’s sister and he takes his job seriously, there is no room for mistakes, for errors, or for second guessing that he acted out of emotion instead of training and experience.

And then he meets Isabelle, and he struggles with being in charge of her protection and wanting more with her, fully cognizant of the fact that pursuing a relationship with her could change the trajectory of his career. He can’t be on the president’s detail and involved with the sister of his protectee, nor can he really move forward after becoming involved with Isabelle, who he meets as a protectee.

So, there is a lot going on, and it complicates their relationship and makes it nearly impossible. The issue is that they both really want to pursue the connection they share and it is harder and harder to maintain the distance required for Nick to do his job.

There is a resolution, obviously as it is a romance with a HEA…but it is one that requires a little give and take on both sides. I liked this, and I believed it. The foundation of the relationship was strong enough that I believed that Nick and Isabelle would make the choices they eventually make.

The pacing was a little slow in the beginning, which made the end of the book move a little quickly, although it seems like this was also necessary as there was a need to build up the info, the backstory, of Nick as an agent and what that entailed.

I do recommend this title. It was a gritty and real-feeling look at the world of a secret service agent, with a little romance thrown in. 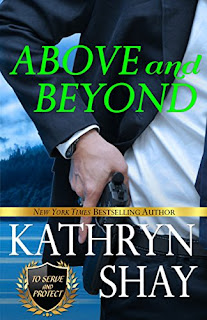 Prologue
“I need you to go to Catasaga, Nick. Indefinitely. Isabelle is getting threatening notes. She could be in grave danger.”
Special Agent in Charge Nick Marino stared over at the President of the United States, trying to hide his shock. The Oval Office felt hot all of a sudden, though the cool rain dribbled down outside the open window facing the Rose Garden. “Seriously?”
From behind the big oak desk, the President gave a small smile.
Nick’s reaction was inappropriate. He shook off the emotion. “Excuse me, sir, but I’m surprised. Of course, I’ll do this willingly.”
Tall and built like a football player, James Monroe Manwaring snickered. “You’re probably furious as hell with me. But there are a couple of perks to the assignment. I’m sending Agent Dwyer in with you.”
“Ah.” He’d never worked with his cousin Whitney, who’d become a legend of her own in the service. Manwaring would know her presence in upstate New York sweetened the pot.
“And in a year, when your time on the presidential detail is up, I’ll see what I can do for you. I hear one of the deputies to the director might be leaving then.”
Nick would move heaven and earth to get in line for the agency’s head job, and the President knew it. Since Nick had joined the Secret Service eighteen years ago, his sole aspiration was to fill the position. Every single career move he’d made had been calculated with that in mind.
“But there’s more to why I chose you.” The President frowned. “The agency has had too many screwups lately. I need someone I can trust up there.”
In recent years, several incidents had blighted the reputation of the service big-time. Agents had allowed the White House to be breached. They’d been drunk and disorderly on the grounds. And most reprehensible, they’d
behaved abominably on advance travel visits. His own brother had been a victim of one of these events, though there were extenuating circumstances.
“I understand, Mr. President. And I apologize for my initial reaction.”
“I appreciate your cooperation, Nick.”
“Do we have any leads on who’s threatening her?”
“No, we don’t. My gut says that it’s me they’re after, through Isabelle. I’ve alienated people, even before I became President.”
He had. As attorney general, he’d busted up a ring of dirty cops, been responsible for a myriad of drug arrests and even taken on two corrupt senators and one judge. Because of all that, when he was elected POTUS, he’d been given the code name Pit Bull.
Sighing, Nick tried to accept that he was going to be a babysitter for several weeks. The very thought of it frustrated him. Because there was nothing more that Nick Marino wanted than to be in the kill zone.

A New York Times and USA Today bestselling author, Kathryn Shay has been a lifelong writer and teacher. She has written dozens of self-published original romance titles, including print books with the Berkley Publishing Group and Harlequin Enterprises, and mainstream women’s fiction with Bold Strokes Books. She has won five RT Book Reviews awards, four Golden Quills, four Holt Medallions, the Bookseller’s Best Award, Foreword Magazine’s Book of the Year, and several “Starred Reviews.” Her novels have been serialized in Cosmopolitan Magazine and featured in USA Today, The Wall Street Journal, and People magazine. There are over five million copies of her books in print, along with hundreds of thousands downloaded online. Reviewers have called her work “emotional and heart-wrenching.” 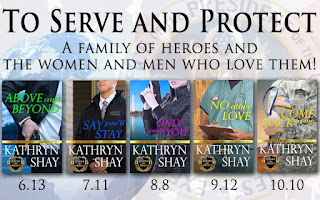 Labels: 3.5 Stars, Above and Beyond, Kathryn Shay, Release Blast, Reviewed by Laura