THE HOUSE MATE BY KENDALL RYAN-SPOTLIGHT 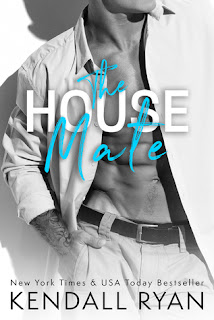 What’s sexier than a bad boy? A bad ass man who’s got his shit together.

Max Alexander is nearing thirty-five. He’s built a successful company, and he’s conquered the professional world, but he’s never been lucky in love. Focusing so much time on his business and raising his daughter, adulting has come at the expense of his personal life.

His social skills are shit, his patience is shot, and at times, his temper runs hot.

The last thing he has time for is the recently single, too gorgeous for her own good young woman he hires to take care of his little girl. She’s a distraction he doesn’t need, and besides, there’s no way she’d be interested. But you know what they say about assumptions?

This is book 3 in the Roommates series, but each can be read as a complete standalone, as they feature new couples.

Single dad books-when they're well done-are kind of my kryptonite. When I saw the blurb for this book I couldn't help but wait for release day on pins and needles so that I could finally read it-and it did not disappoint. There's heat, heart and an adorable little one in the mix which added up to a definite 5 star read for me.

I fell for Max hard right from the very start. He makes it almost impossible not to, trust me. I think what Max makes such an easily lovable character is how realistic he is. He's not perfect-and doesn't try to be. He's just trying to make the best of the situation that he's been given. His focus and determination are incredibly sexy.

Addison is sweet, if not a little young...but I think it worked in this story. She was sweet, caring and tempted by Max (seriously, find me someone who wouldn't be) but still has her head on her shoulders enough to care about the innocent party in all of this, baby Dylan. I believed in Addison, who she was, what she cared about, it was all very honest.

The chemistry between these two was off the charts, and it jumps off the page from the moment they meet. I loved watching them struggle against the inevitable, only to come together so spectacularly. I liked that they didn't jump into a relationship right away, the build and pacing of them eventually coming together was great.

There was a bit of drama here but it worked. It was all drama that I could see happening if this situation were to happen in real life and I appreciated that the author kept the focus on Max and Addison even as secondary characters tried to insert themselves into the equation.

The end of this book had me sighing and smiling all at once. This is definitely a book I will go back and read again. I highly recommend it.