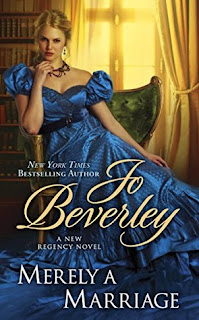 The New York Times bestselling author of The Viscount Needs a Wife returns with another roguishly delicious Regency romance...

As England mourns the death of Princess Charlotte, Lady Ariana Boxstall has another succession in mind. Her brother, Norris, is a strapping young man, but he s also happily unmarried and childless. Norris agrees to take a wife on one condition: that Ariana take a husband first. Although she realizes she risks a lifetime in a loveless marriage, for the sake of her family, Ariana accepts his challenge.
When the Earl of Kynaston met Ariana eight years ago, he broke her heart. Since then, his own heart has been broken, and he s sworn off love...until he sees Ariana all grown-up and his resolve is threatened.
Could Ariana s bargain with Norris actually lead her to happiness? With real love on the line, she must win over the one man who refuses to be had."

Ariana and Kynaston had, I think, the potential to be a lot more interesting than they ultimately were, which is a shame as I had high hopes for this title, especially as this is the last book by Jo Beverly.

There was a lot going on here, with scandals in papers, running off to elope, brothers who don't want to marry, trips to London, and attempts to marry off a woman who is nearing (if not already) at an age where she would be considered a spinster.

Unfortunately, there was so much going on around Ariana and Kynaston that you sort of lost the story of them, and this is what the book is supposed to be about, their story.  I didn't like their initial meeting in this book, and I thought that the attraction felt forced at first, which was a little hard to get past.

I did like the writing, and the stories that were told, but more as a woman's fiction story and less as a romance of the 2 characters.  I would have been interested to hear some of the other stories in a later book, although with the death of the author sadly this isn't an option. There was just too much going on in this story for me to be able to feel fully invested.

The writing, as I mentioned, was wonderful and charming, and so perfect for a historical novel.  It felt like it really was set in the 1800's while maintaining the ability to read it without having to look up each word on the page.

There was a lot about this book that was charming, and there were parts of it that didn't work the best.  But, for fans of this author, reading her final book is definitely worth it.  I do recommend this title.

Buy This Book!
Amazon
Posted by Booked All Night - Laura at 1:00 PM