RESTRAINED UNDER HIS DUTY BY STACEY KENNEDY-ARC REVIEW 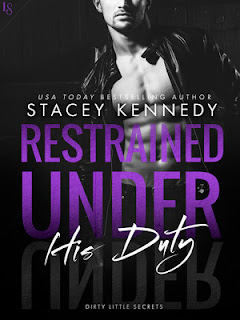 An uninhibited politician’s daughter falls for her loyal bodyguard behind closed doors in this scandalous novel from the USA Today bestselling author of Bound Beneath His Pain and Tied to His Betrayal.

As the chief of security for a prominent senator, Ryder Blackwood is stunned when an anonymous source sends him a compromising photo of his boss’s twenty-five-year-old daughter getting down and dirty in an underground sex club. If it gets out, the media firestorm could ruin her father. More troubling for Ryder is how arousing he finds the whole situation. He’s known Hadley Winters since she was a kid. And now she’s the woman in all his most private fantasies.

Wild behavior helps Hadley get through those painful, lonely nights, but she’s been waiting a long time for a man like Ryder to protect her from herself. Ryder is raw. He’s real. And he makes her feel safe. Now that they’ve both become pawns in a blackmailer’s dangerous game, there’s more at stake than her father’s political career. As the intimate threats tear apart a tender new love, Hadley is forced to trust Ryder with her life—and her heart.

I like Stacey Kennedy, and I like this series. I was looking forward to this one...and as a book, it did not disappoint, but as a part of the series, I wanted more of the rest of the men, and more resolution in the situation with the bug in the bar that was revealed in the previous book.  I felt there was a lot of build up on that situation that was not fully developed in this book.

That said, the attraction and the chemistry with Hadley and Ryder was wonderful, it was hot, and it was compelling.  I loved the idea that the stop to them being together was Ryder and that, ironically, her father really had no issue with it (don't worry, happens really early) and you know almost immediately that it is his sense of duty (hence the title) that is causing any issues with them being together.

The writing was strong, as was the pacing around the relationship.  There were parts that I felt were cut out too early, but this was around the bug, and the issues that were brought up in the other books.

For the relationship, the chemistry, and the story of Hadley and Ryder, I totally recommend this book...but if you are looking for a lot of forward momentum in the other story, there is not a lot in this one.  It is not totally ignored, but it feels like a lot less of a focus than it was in the earlier books.

I do recommend this book.