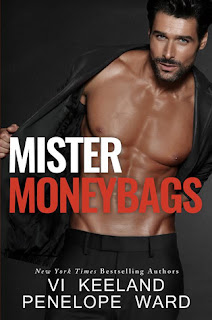 I met Bianca in an elevator.

She was on her way to interview me when we got stuck.
The beautiful raven-haired reporter assumed I was a delivery guy because of the way I was dressed.

She had no clue I was really Dex Truitt, the wealthy, successful businessman she’d dubbed “Mister Moneybags”―her afternoon appointment.

Bianca told me how much she hated Dex’s type―snobby, over educated, silver-spooned men who didn't appreciate the simple things in life.

So, after the elevator finally started moving again, I cancelled the interview and let her believe I was someone I wasn’t―a bike messenger named Jay. I loved the way she looked at the fake me and didn't want it to end.

I began dating her as “Jay”―all the while letting her interview the real me over email.

And she was falling for two men.
Only, both men were me.
And when she found out, we were both going to lose her.

Nothing could have prepared me for that day. And I certainly wasn't prepared for what came after.

All good things must come to an end, right?
Except our ending was one I didn't see coming.

I'm a fan of Vi Keeland and Penelope Ward, both separately and together. When I saw the blurb for Mister Moneybags I couldn't stop smiling, imagining the fun the authors had in store for me. Overall, I really enjoyed this book. It had the witty, sexy banter I've come to expect from these authors and was a good story overall.

I adored Dex. I really, truly did. I didn't expect to-knowing he was starting off his relationships with Bianca on a foundation of a lie but I got why he did it. And once he started, he was fully committed. A man that committed to a fake character just to spend time with someone has to have some redeeming qualities, right? Dex definitely did. He had me laughing and swooning.

Bianca, well, she just made me want to hug her. She was smart and sassy but also had a touch of vulnerability about her that made her seem so very real. I liked that she gave as good as she got with Dex.

The connection between these two was very strong and very believable. I loved their playfulness and their innate sexiness. It just all worked very well with them.

There was a bit of drama that I didn't love in the book. I just didn't see the necessity of it, but that's just a personal preference. It was well written and worked within the plot but I think it was just a bit much.

I do appreciate the cameo of a certain character that the authors use in their books. I'm always on the lookout for him to appear and laugh every single time he does.

I enjoyed this book overall. It was funny, sexy and had just the right amount of sweetness to it. I would recommend this book and look forward to the next collaboration from these authors.