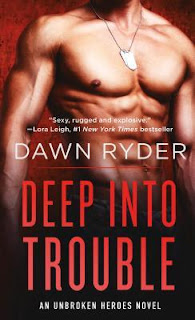 Desire is more dangerous than anything in Deep Into Trouble, the next Unbroken Heroes novel from Dawn Ryder.

Saxon Hale lives for the hunt--taking down the bad guys, stopping them dead in their tracks. His latest mission has him in New Orleans, where people go for the party that never ends. But fun is the last thing on Saxon's mind now that he's a breath away from closing in on a vicious overlord known only as the Raven. Until an innocent young woman unknowingly enters the very deadly game...

Ginger Boyce is a librarian who's growing tired of being so buttoned-up on the job, and when she attends a conference in the Big Easy, she decides to taste the wild side of life. But when her dance with darkness becomes lethal, she's in dire need of protection--and ends up in the embrace of a man who radiates danger and desire. Soon Saxon finds himself Ginger's shield against an enemy whose power they haven't yet begun to face. But will he be able to keep his mind on his mission while the very woman under his care drives him beyond distraction?

So, I am going to try for something in the middle.

Saxon and Ginger were, at first look, an odd match.  He is a special forces soldier, she is a librarian.  To say they live in different worlds is an understatement.  But, it works.  The draw they have to one another is compelling, and interesting.  And, it is strong enough to make you willing to believe that both of them would have been willing to be involved with the other...even though the situation they found themselves in was one that would make a lot of people run...witnessing a violent crime is rarely the beginning of a romance.

But in this it works.

I enjoyed this book.  The writing was strong.  The pacing was mostly well constructed, which is important in a romantic suspense...you need to believe the romantic interludes and the danger of the situation.  In this case, I thought the balance was a little too much toward the suspense...not enough to keep me from enjoying it, but it did leave me wanting more.