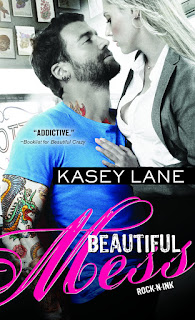 When attorney Jami Dillon strides into the conference room to meet her new client, she's stopped in her tracks by an all-too familiar figure. Jackson Paige. He's her tall, tattooed, and sexy as hell hook up from law school-who also broke her heart.

Hell's bells.
Jackson Paige was, in fact, Jax Pain, the drummer of Manix Curse.
That thing in Jami's chest tightened, making it hard to breathe.

Jackson Paige, aka Jax Pain, has worked hard to put that unfor-frickin-gettable fling behind him and the nasty secret that made him leave her. Truth is, life as the playboy drummer of Portland's hottest metal band hasn't helped him to forget the fiery, sexy woman who stole his heart. Lucky for him, Jami was just hired as his band's new attorney. But when he sees the look on her face when she realizes who her new client is, Jax wonders if maybe being this close to her again isn't such a great idea. The explosive chemistry is there, but so are the dark secrets...

I went into Beautiful Mess knowing that it was the second book in a series without having read the first.  I wanted to read this one because I love second chance romances and I have a weakness for books with musicians.  I did struggle in the beginning to connect with the book but overall enjoyed it.

I believed in the chemistry between these two characters-both currently and their previous fling.   It took me a bit to get there but once I did, I was all for them. Jami definitely had her share of issues to overcome, and at times they may have appeared to be repetitive but I didn't hate that.  Not everyone learns things the first go around right? It's human nature to stumble back over the same things a few times before overcoming them so I didn't mind that about her at all.

The secondary characters in the book are fun without being overwhelming, and definitely intrigue me enough to make me want to try this author's other work. The path for this second chance romance wasn't smooth sailing, but I didn't mind the work put into them.  I will say that the book started slow and had some pacing issues, but overall I did enjoy it. 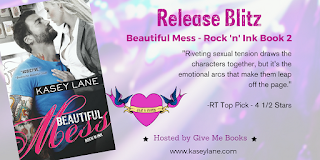 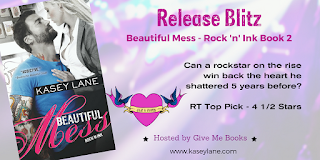 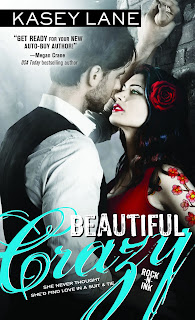 Award-winning author Kasey Lane writes sexy romances featuring music, hot guys with ink, kick ass women, and always a happily ever after. A California transplant, she lives with her high school crush turned husband, two smart, but devilish kids, two dumb-as-rocks Papillons, and a bunch of bossy chickens in the lush Oregon forest. Visit her at http://www.kaseylane.com/ where you'll find her swearing too much and talking about the San Jose Sharks, tattoos, and Jack White.