HER DOMINANT SEAL BY CAITLYN O'LEARY-REVIEW 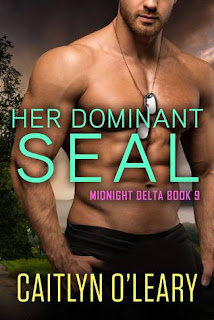 A Cry For Help
It only takes one phone call and Navy SEAL Drake Avery is rushing back to Tennessee in the middle of the night. His sisters are in danger and he will do whatever it takes to protect them.

A New Twist
Now is not the time for a relationship, but damned if Drake doesn’t cross paths with a smokin’ hot kindergarten teacher named Karen Eastman. Miss Eastman has Drake thinking naughty thoughts when he needs to have his head in the game. He never thought he’d be hot for teacher.


Demons from the Past
Part of the hell of going home is that you know everyone, and they know you. Just when you think you can trust someone, they can turn on a dime. Old and new enemies are thrilled to discover Drake has a beautiful new weakness: Karen. But messing with the women in his life, is a mistake. You mess with the bull, you get the horns.

Drake and Karen had wonderful chemistry, and their story was a lot of fun, once they actually got together. Their first real interaction wasn't until about 40% into the book, and for me this messed up the pacing of the story, as their relationship, and the resolution of the other events, seemed a lot faster than the first part of the story.

There was also a lot of additional stuff going on around the central couple, with a difficult family history, issues with the local police, etc. which I found to be a little distracting. I get that he was from a large family, with 6 sisters as was often pointed out, but giving each of them time, and mention, in the story left me feeling like the narrative was pulled in a lot of different ways.

The lack of the focus in the narrative as well as the time it took to get the main characters together made this feel uneven from the beginning to the end and resulted in a narrative that felt forced and pacing that seemed very uneven.

There were small appearances of other characters who were from other books, and while there were some moments with the characters, nothing that I would consider to be a spoiler or something that would keep this from being a standalone.

Amazon
Barnes & Noble
Posted by Booked All Night - Laura at 9:00 AM